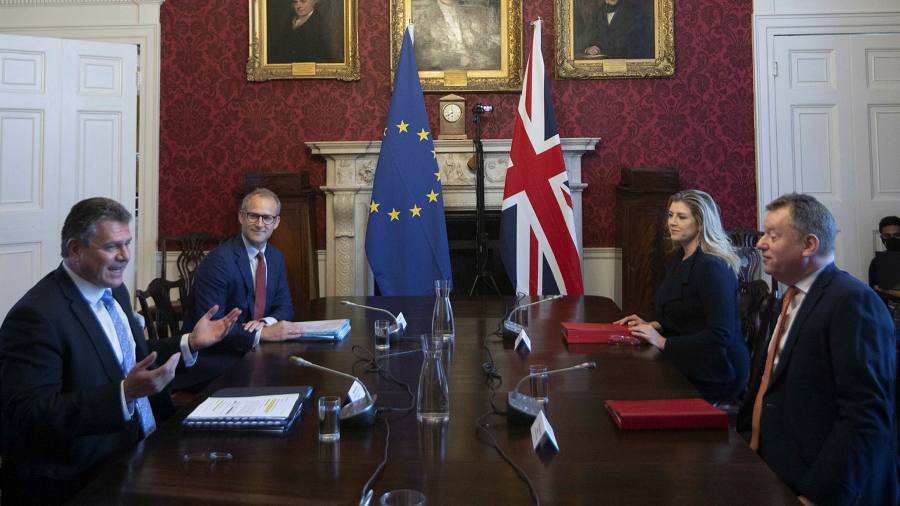 
Brussels warned that after the London talks failed to overcome deep-rooted differences over Northern Ireland, the EU’s relationship with the UK is at a “crossroads” as the EU threatens to impose trade sanctions on the UK if it fails to comply with its legal obligations.

After the Brexit Secretary David Frost and European Commissioner Maros Sefcovic met in London on Wednesday, the two sides agreed to continue the talks. However, they confirmed that there are disagreements on how to address the numerous stimulus factors in Northern Ireland’s trade arrangements, from veterinary inspections to pet travel.

After the talks, Sefcovic told reporters that the EU’s patience with the United Kingdom was “very, very thin” because it was deemed to have failed to implement the basic parts of the Northern Ireland Agreement, which established a regulatory and customs border between the region and the United Kingdom.

“If the UK takes further unilateral actions in the coming weeks, the EU will respond quickly, firmly and resolutely without hesitation to ensure that the UK complies with its obligations under international law,” Sevkovic said, while emphasizing the EU’s desire to cooperate with Britain is looking for a solution together. “Trust needs to be restored,” he added.

Frost told the broadcaster after the meeting: “There is no breakthrough, and there is no malfunction”, adding that the two sides will “continue to negotiate.”

US President Joe Biden will also raise this issue during his trip to Europe, including talks with Johnson before the summit. Sefcovic added that “several” representatives of the US Congress have contacted him for the latest situation.

After the meeting, Frost reiterated Britain’s complaint that “the EU insists that we operate the agreement in an extremely pure manner”.

“The reality is that this is a very balanced document… To deal with the very sensitive politics of Northern Ireland.”

The lack of a breakthrough means that pressure on both sides will increase before the temporary exemption that allows British sausages and other frozen meats to enter Northern Ireland expires at the end of this month.

Sefcovic said that, given that for Brussels, the UK has failed to comply with the conditions of the previous grace period, such as clear labeling of products, it is difficult for the EU to commit to further extension of the supply of refrigerated meat at this stage.

Brussels insists that it is working to identify creative solutions that both sides can agree on to resolve obstacles to trade arrangements after Brexit.

Sefcovic emphasized the EU’s efforts to find solutions, including removing administrative barriers to the sale of UK-made drugs in Northern Ireland and relaxing guide dog travel. “But we cannot withdraw the core content of the agreement,” he said, noting that the EU needs to ensure that the goods entering its market meet EU standards.

Johnson defended Britain’s attitude towards the NI agreement on Wednesday. “We are prioritizing the right of the people of Northern Ireland to freely and uninterruptedly obtain goods and services from the entire United Kingdom,” he said in response to a question from the prime minister.

“We are working hard to ensure that we protect the territorial and economic integrity of our country.”

Johnson’s support for Frost in the House of Commons reflects Downing Street’s determination to show that the Prime Minister firmly supports his brutal Brexit minister.

“I think David Frost did a great job,” he said. “He is the greatest frost since the Great Frost of 1709.” A British official said that EU diplomats made a mistake when briefing the minister.

The meeting also involved other bilateral issues such as fisheries and civil rights. After the meeting, the United Kingdom announced its own breakdown of the state of the discussion, saying that in some “limited areas” (including free areas), “some progress has been made in solutions.” The movement of guide dogs and VAT arrangements for second-hand vehicles.