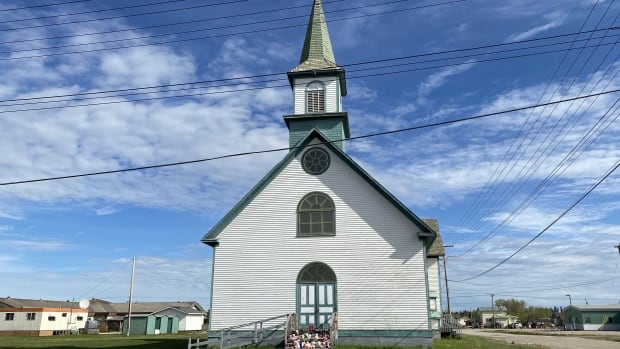 Since no pope apologized for the role played by the Catholic Church in the atrocities at the boarding school, the bishop of the Northwest Territories offered his own apology.

“We are representatives of a collusive church, involved in the deaths of these children, so we must admit this.

Hansen said: “We must work hard to solve what this means to us, we must move forward and do what we are required to do this time in history.” “That is to make up for all the mistakes we made.”

Since found in the site of a former boarding school in Kamloops, British Columbia Believed to be an unmarked cemetery with approximately 215 child remains, The new spotlight has been cast on the Catholic Church, which runs more than half of the boarding schools of the federal government.The Anglican Church also runs schools, and Already apologized.

The north is home to thousands of Catholics and Anglicans, many of whom are indigenous. The feelings surrounding faith and the role of the church in the atrocities committed by boarding schools are diverse and complex.

‘The disgrace of the Pope’

Elder Ruth Mercredi is a therapist and consultant at the Arctic Native Health Foundation Treatment Camp in Yellowknife, and a survivor of the boarding school.

In the warm tent of the camp, Mercredi put the beads aside before talking about what she believes is the double standard in the church.

“One of the things we were taught in the church when we were young is not to hurt our children.

She said: “That was the first law. They didn’t abide by their own law at all. It’s really shameful to see it.”

“Our elders said,’The Pope is shameful.’ He didn’t come forward and take responsibility, which made him feel ashamed, because the whole world knows that this is happening and what is being done to the indigenous people.”

Mercredi was “very disappointed” for not apologizing to Pope Francis.

Last Sunday, the Pope expressed his “close relationship with the Canadian people traumatized by Kamloops’s discovery”, but did not apologize.

This week, Perry Bellegarde, National Chief of the First Nations Congress, and David Chatlander, Vice-Chairman of the Metis National Committee, stated that they were working Plan to visit the Vatican Seek an apology from the Pope this fall.

Dëneze Nakehk’o is an educator and was once the emcee of a university. Parade in Yellowknife last week to commemorate the children Lost in Kamloops. He said he was not waiting for an apology from the church.

“If you wait for them, you will only be disappointed,” he said. “As a Danny, we have our own way…spiritual connections, these things support us in front of Jesus.”

Nakehk’o admitted that many people in NWT have close ties to the church, and his public opposition to the organization is not to make people feel sad.

But priests and nuns, he said, “To people like me, to my father, my mother, my aunts and uncles, and many other people there, I did terrible things, so I don’t want to do anything. Things. Do that.”

He said he hoped that the church would return the land they held and publish the documents they kept related to the boarding school.

Nakehk’o also stated that the world must listen to and trust the survivors of the boarding school.

He said: “But please stay kind and generous. Don’t expect these survivors or indigenous people to bear all the heavy emotional burdens for you.”

“We are strong and resilient, but we don’t want to prove it over and over again.”

These churches lied to us and carried out cultural genocide.-Dene National Chief Norman Aklia

Dene National Chief Norman Yakeleya called for an international investigation into the deaths of boarding school children. He wanted the truth from the Catholic and Anglican churches.

“These churches lied to us and practiced cultural genocide,” he said.

Akrea hopes that the Pope will “come and meet with us face to face.”

Bishop Hansen said that he has expressed frustration and disappointment for the lack of an apology from the Pope in the boarding school in the past.

Although he doesn’t think this gesture will be a “magic bullet”, he said that if boarding school survivors and “most Canadians” demand an apology, then he will support it.

Hansen also stated that his parish will cooperate with any investigation of the boarding school deaths and audit the records if needed by the Aboriginal community.

Anglican bishop David Parsons of the Arctic Diocese, Northwest Territories, Nunavut and Nunavik said that the church and the wider Canadians need to be held accountable and “accepted” for wrongdoing.

He said this means listening to the opinions of survivors and their communities.

Parsons said that while some people are dissatisfied with the church and want it to “disappear,” others want the church to be stronger.

He said: “I heard that people want us to be more involved, and most of these people are people who have gone to boarding schools.”

He said: “I am sorry for what the church has done and I am sorry for participating, but it is not enough to say sorry and apologies,” he added, “our indigenous brothers and sisters” need to be heard.

An apology is not enough

For Mercredi, an apology is not enough.

“For me, it’s hard to forgive now because of all the… terrible things that have happened to our people,” she said.

Mercredi hopes to take more actions, such as returning the land and supporting the revival of indigenous languages.

“Our people are struggling, they take to the streets, and many of us are now questioning their beliefs.”