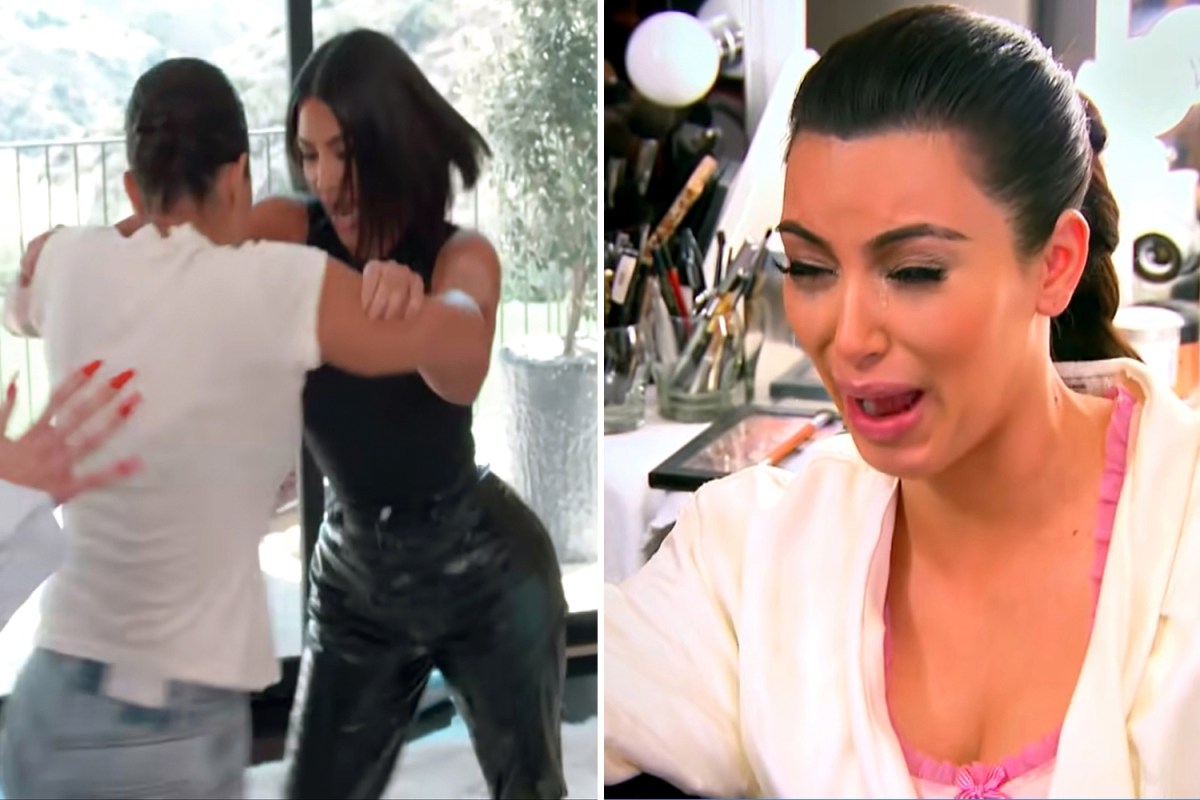 
KEEPING Up With the Kardashians has featured a number of shocking moments over the past 20 seasons.

From Kim and Kourtney Kardashian’s violent fight to Khloe’s DUI and Caitlyn Jenner’s transition bombshell, the reality show has been fallen short when it comes to drama.

One of the most recent shocking moments took place on the June 3 episode of KUWTK, which found Kim in tears as she admitted to feeling like a “loser” as her marriage to Kanye West came to an end.

A clip is then played of Kim sobbing on the bed next to sister Kylie Jenner, as she said: “I can’t do this anymore. I can’t.

“How am I still in this place where I’m stuck for years?

“Like he goes and moves to a different state every year.”

The mother of four continued: “And I have to be in a place where I’m together for the kids.

She continued: “I think he deserves someone that can support his every move and go to Wyoming to be with him and follow him everywhere.

“He deserves a wife who travels with him and is there for everything. I feel like a f**king failure.”

Kim concluded: “Yeah I feel like a f**king loser it’s the end of a 13-year-marriage.

“But I can’t even think about that. I want to be happy.”

The KUWTK star filed for divorce from Kanye in February after six years of marriage, while the exes have been working through custody agreements.

During Season 18, an argument between Kim and Kourtney, 42, turned violent when the 40-year-old slammed her old sister’s work ethic.

The pair were seen arguing before things turn physical, as Kourtney yelled: “You have nothing to say.”

“Don’t ever come at me like that,” Kim snapped back before aggressively lunging at her.

The sisters then hit each other before they were pulled apart, though a source exclusively told The Sun that the conflict was deliberated exaggerated to create drama for the show.

The insider revealed: “It really didn’t escalate to anything other than a shove and Kim didn’t land the punch. It’s really exaggerated for TV. Made for TV drama.

“They really don’t hate each other, and mom Kris [Jenner] would NEVER let there be actual violence.”

Another dramatic moment to take place on KUWTK was when Khloe, 36, learned her baby daddy Tristan Thompson, 30, had cheated on her with Kylie’s best friend Jordyn Woods, 23.

During the Season 16 finale, Kim explained that her friend heard that “Jordyn and Tristan were at his home late at night or until 7 in the morning.”

She said in a confessional that the pair were allegedly “making out,” though admitted she “didn’t believe” the claims.

While on a call with Kim and Kourtney, Khloe said she spoke to Jordyn though wasn’t given “all the information.”

Jordyn claimed Tristan- who shares three-year-old daughter True with Khloe- tried to kiss her and stated she couldn’t remember what happened.

Back in Season 15, Kim shocked fans when she slammed Kourtney as “the least interesting” sister to look at.

While discussing a photoshoot for their family’s annual holiday card, Kourtney made it clear she wouldn’t change her schedule in order to participate.

After bickering back and forth, Kourtney walked away as Kim said: “Kourtney is out. She won’t be at the shoot because she is the one that has the annoying schedule. I can’t handle this anymore because everyone is dropping left and right from all these schedule changes. I need Kourtney to not be so f**king annoying with a stick up her ass like she runs this s**t because she doesn’t. She’s the least exciting to look at.”

Also during Season 15, Khloe dealt with Tristan’s infidelity while giving birth to their daughter.

After welcoming True, Khloe told her sisters that she was stressed out about her baby daddy’s cheating becoming public knowledge.

While in the hospital, Khloe said: “Everyone has their own s**t that I know nothing about and mine is thrown on the public of everything and it’s a lot harder to filter through stuff when it’s this public and when I gave birth the following day.

Back in Season 13, drama ensued with Kourtney’s baby daddy Scott Disick, 38, tried to hide a mystery woman in his room during a trip to Dubai with Kim and their friends.

After a friend told Kim that she found a purse in their hotel, the 40-year-old became suspicious that Scott was hiding a girl.

As Kim began to investigate, Scott told a producer that “there’s a girl downstairs.”

He paced back and forth as he said: “I’m gonna have a heart attack.”

The Kardashian sisters expressed their disappointment as they slammed brother Rob, 34, for becoming engaged to Blac Chyna, 33, behind their backs.

During a Season 12 episode, Kim, Khloe and Kylie discussed their brother’s surprise engagement.

Kylie added: “People are trying to make it this big feud and it is what it is.”

She explained in a confessional that “none of us really care,” stating: “We just want Rob to be able to tell us when he’s gonna do something so big like this.”

The pair- who share four-year-old daughter Dream- eventually split before their wedding.

During a Season 10 episode, Khloe, Kim and Kylie were scared for their lives as they experienced a scary car accident.

While the sisters were in Montana for a family ski trip, Khloe was behind the wheel as they began to slide on the road.

The mother of one exclaimed that the sliding wasn’t “her fault” as she tried to gain control of the car, while Kim was heard screaming in the backseat.

When Kim and Kanye, 44, tied the knot during Season 9, the family was shocked when Rob chose not to attend the wedding.

Scott explained that Rob flew back home to Los Angeles while the rest of the family traveled to Paris.

Kim said in a confessional: “When Rob flew to Paris, he read some nasty comments about himself and he just didn’t feel comfortable and he didn’t want to see all of my guests and it makes me so sad for him.

“It’s heartbreaking. It really is.”

Before Kim and Kanye’s fairytale wedding, the rapper arranged an elaborate proposal for his bride-to-be.

The family flew to San Francisco to witness Kanye popping the question at AT&T Park on Kim’s 33rd birthday.

While getting down on one knee, Kanye blasted “PLEEEASE MARRY MEEE!!!” on the Jumbotron as the reality star said, “Yes.”

A 50-piece orchestra then played Lana Del Rey’s “Young and Beautiful” and Kanye’s “Knock You Down” before their friends and family ran out from the dugout to congratulate the couple.

A major bombshell featured on KUWTK happened in Season 10, when Caitlyn revealed her plans to transition.

While talking to ex-wife Kris, Caitlyn admitted the 65-year-old was “the toughest one to talk to out of anybody.”

An emotional Kris responded: “Well maybe it’s because I’m the one you lied to the longest.”

She later admitted to “struggling” as she worked to “process the pain” regarding Caitlyn’s transition.

Kris told her ex: “It’s like I have to mourn Bruce Jenner because I feel like you died.”

During a 2012 episode of Kourtney & Kim Take New York, Kim broke down in tears as she admitted she wanted to end her marriage to Kris Humphries.

Kim told Kourtney and Scott that Kris, 36, wanted to move out of their home, while she quickly broke down in tears.

She said: “I have nothing to talk to him about. He has a good heart. He’s a Christian. He’s everything on paper. Exactly what I want in someone, but for some reason my heart isn’t connecting.”

Kim continued: “You think I feel good that I met this guy from Minnesota and I made him move out here and change his whole life? And I feel bad for him. I feel sad. I feel bad for the guy.

Back in Season 6, the famous family took a trip to Bora Bora.

After Kim’s husband Kris Humphries threw her in the water, the reality star quickly became hysterical when she realized she lost her $75k diamond earring.

Kris jumped in the water to help find the earring, though Kim said they’re “not gonna find it in the ocean.”

The reality star got out of the water and tearfully updated her mother on what happened.

When Kourtney was told about the situation, she memorably said: “Kim, there’s people that are dying.”

Back in Season 4, the Kardashians worried for Scott when his partying ways got out of hand.

During a confessional interview, Khloe said: “Scott has messed up consistently. Literally, it’s like a merry go round.”

A clip then showed the father of three shoving a dollar bill into a waiter’s mouth as they argued.

Also the fourth season, Khloe shocked both her family and friends when she decided to tie the knot with Lamar Odom, 41, after just one month of dating.

While Khloe and Lamar had the fairytale wedding of their dreams, their marriage was less than ideal as the basketball player dealt with his addiction.

Throughout their marriage, Lamar was arrested for a DUI and was later hospitalized when he was found unconscious after suffering kidney failure, several heart attacks and 12 strokes.

Khloe filed for divorce for a second time in 2016, while the request was finalized in December of that year.

Years before Kim and Kourtney got into a physical fight, the 40-year-old showed her intense side when she hit Khloe with her purse.

Following a fight about Kim’s first solo business endeavor, Khloe slammed a door on Kim as she left the room.

Kim rushed back to Khloe and began to hit her with her purse, shouting: “Don’t be f**king rude!”

As Khloe tried to take Kim’s bag away from her, the mother of four punched her younger sister’s arm.

The first season of KUWTK gave fans a glimpse of what kind of drama the family gets themselves into, as Khloe was memorably arrested for a DUI in 2007.

Her initial punishment was community service, though she was also ordered to complete an alcohol education course.

The arrest was documented on the show, which included Kim famously taking selfies as she and her family members drove to pick up Khloe.