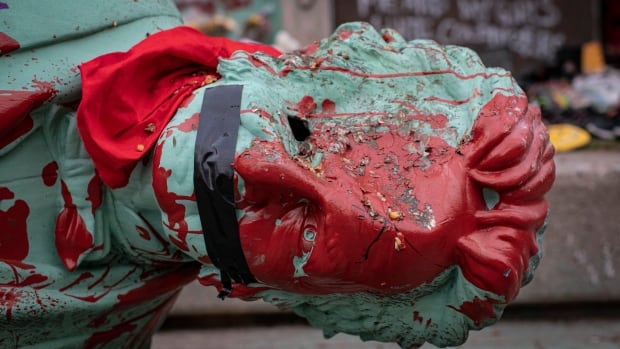 Hundreds of professors and other faculty members at Toronto Ryerson University signed a letter asking the school to change its name-just a day later The statue of Egerton Ryerson was torn down on campus.

Approximately 345 professors, including three associate deans, signed a letter stating that “it’s time to stop commemorating Ryerson.” This is one of several petitions and letters from the university community that made similar demands; university staff, Aboriginal faculty, and Aboriginal students have all written open letters.

“Today, there is no cover or excuse to avoid the truth about our university with the same name,” the faculty and staff wrote in the letter. “Every indigenous family in this country has been influenced by an Indian boarding school, and our legacy as a designer of the boarding school system is why we must now serve as a faculty member in this institution.”

On Sunday, at a rally called “Bring the Kids Home”, the university’s Egerton Ryerson statue was torn down. As many as 1,000 people participated and marched from Queen’s Park to Gould in Toronto street.

According to reports, the remains of as many as 215 Aboriginal children were found on the site of a former boarding school in Kamloops, British Columbia, and the rally was held.

Egerton Ryerson is considered one of the main architects of Canada’s boarding school system. In recent years, faculty and students have been calling for his statue to be removed and the university to be renamed.

“The time for the debate is over,” the letter read. “Symbols of oppression and genocide that are diametrically opposed to our established values ??of fairness, diversity, and inclusiveness have no place in our communities.”

Nearly 200 faculty members also signed their own letters requesting the same, as did indigenous faculty, staff and students.

The faculty letter finally called on the university to “permanently demolish the statue of Egerton Ryerson” and “announced its commitment to rename the university.”

In a statement issued after the incident on Sunday, Ryerson University President and Vice President Muhammad Rachemi said, “This statue will not be repaired or replaced.”

The working group considers renaming and demolishing the statue

In response to the growing controversy regarding the status of Egerton Ryerson in the institution, the university established a Standing Strong (Mash Koh Wee Kah Pooh Win) working group and authorized it to reconsider the name of the university, Egerton Ryerson. Elson’s legacy and other campus commemorative elements.

“Their work now is more important than ever,” Lakimi wrote.

The working group also issued a statement after the statue was torn down.

Co-chairs Joanne Dallaire and Catherine Ellis said: “As the statue was demolished, many students, faculty and community members who worked tirelessly for the demolition did not have the opportunity to witness its collapse. At that moment, it may be regrettable.” wrote.

The working group has been working with faculty, staff, and students since it was launched in November 2020 and started meeting in January 2021.

The team’s recommendations to the university president will be formulated and submitted in the fall of 2021. Until then, the working group will “completely review all submissions during our participation, while we will continue to monitor new statements, petitions and calls to action when they come forward,” the organization’s statement said.

Some students, faculty and staff began to refer to this university as “University X” in official newsletters.