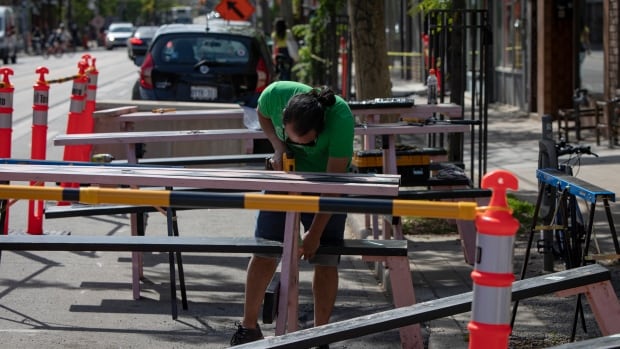 As the third wave of COVID-19 subsides, Ontario will reopen on Friday


Ontario’s Chief Health Officer, Dr. David Williams, plans to hold an update on the COVID-19 situation in the province at 3 pm Eastern Time. You can watch it live in this story.

The government said on Monday that Ontario will enter the initial phase of its reopening plan three days in advance, including relaxing restrictions on retail and outdoor activities.

The province stated that the decision was based on the vaccination rate and “continuous improvement of key public health indicators.”

In a statement, Governor Doug Ford thanked the people of Ontario for their “great sacrifice” and praised the ongoing immunization campaign for making it possible.

Ford said: “When we start to enjoy the benefits of the first step in the roadmap, such as meeting friends on the terrace or visiting your favorite local store, please continue to follow all public health guidelines to proceed safely.”

The province should initially begin the first phase of the plan, called the reopening road map, on June 14. Instead, it will take effect at 12:01 AM Eastern Time on Friday.

The first phase allows for changes, such as larger outdoor gatherings, terrace dining for up to four people, and non-essential retail stores opening at 15% capacity. Outdoor religious services, group exercises, and children’s day camps can also be restarted, but appropriate restrictions and health measures must be taken.

As of Sunday, Ontario has received more than 10 million doses of the COVID-19 vaccine. Approximately 61.2% of the total population, that is, 72% of the population aged 18 and over, have now received at least one injection.

The chief medical officer of the government and the Ministry of Health, David Williams, has set a threshold for at least 60% of adults to get the first injection before starting to reopen.

The number of cases continues to decline

At the same time, the weekly COVID-19 trend continues to decline overall.

The province reported 525 new COVID-19 cases this morning, which is the lowest since late September 2020.

The laboratory only completed 15,117 tests, and the Ontario Public Health Agency’s positive rate was 3.6%, but today’s number of cases is much lower than last Monday, when only more than 18,000 tests were completed and 916 infections were confirmed.

There are approximately 7,937 cases of active infections in the province, which is lower than the peak of the third wave of nearly 43,000 cases.

According to the Ontario Intensive Care Service Center, the average daily number of new admissions to the ICU continues to decline.

The Ministry of Health recorded another 15 deaths from the disease, bringing the official death toll to 8,869.

At the same time, the public health department received 116,829 doses of COVID-19 vaccine yesterday, the most in history on Sunday.

Today, more people in Ontario are also eligible to book a second dose of vaccine through the provincial system.

Those 70 years of age and older, as well as those who received the first dose of the mRNA vaccine on or before April 18, can now order the second dose on the province’s website or through its phone line.