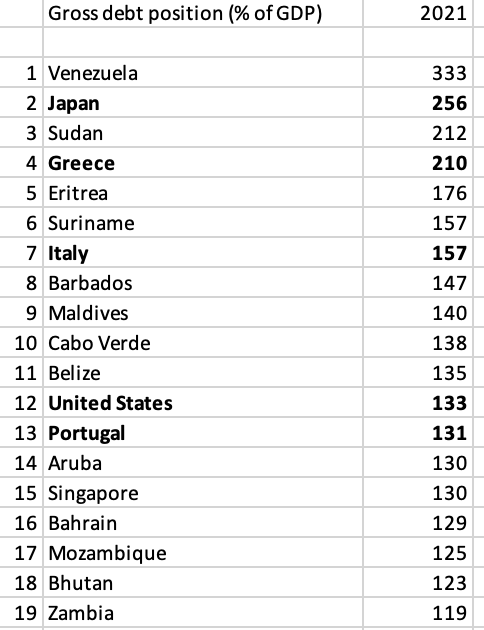 Grumpy Economist: What about Japan?


What about Japan? This is a question I often hear from advocates of fiscal expansion. Japan has huge debts and there is no crisis or inflation (so far). Doesn’t this prove that the United States can borrow one ton more effortlessly?

I make two new points today: 1) Not every high-debt country is so happy. 2) What did all Japan’s fiscal stimulus measures get? Indeed, I will begin to ask “What about Japan?” Japan seems to be a difficult case for those who argue that fiscal stimulus will save us from prolonged stagnation or other prosperous projects brought about by huge spending plans.

Here, freshly baked International Monetary Fund Financial Monitoring in April It is a list of the top 30 countries sorted by debt to GDP ratio. I bolded the larger countries.

Yes, Japan accounts for 256% of GDP. However, the champion is Venezuela. Sudan and Eritrea are not known for their economic prosperity. Greece and Italy have not been used as role models. Argentina has fallen behind the United States in serial defaults.

If Japan is sustainable, that does not mean that all huge debts are sustainable. This means that Japan is different from the other countries on the list — or countries that are now lower on the list because they have breached their contracts or have experienced a crisis.

2. So, what exactly did Japan get from these debts?

Since the 1990s, Japan’s GDP growth rate has been very low, inflation rate is very low, and interest rates are zero. I think it is low “supply” growth, but it should be a typical representative of “long-term stagnation” fans.

So I reversed the question: If a huge deficit including a lot of “infrastructure” can boost the US economy, why didn’t Japan do so?