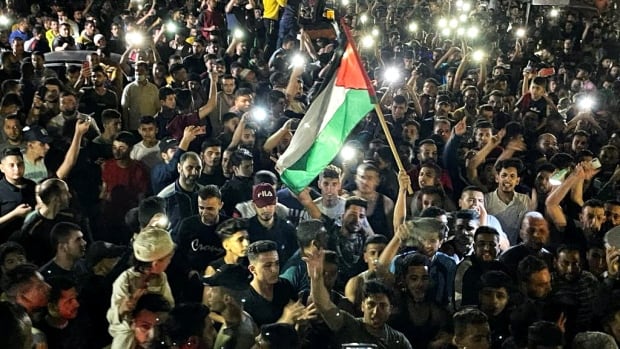 
With the disappearance of social media posts and the decline in the spread of stories, some Palestinian supporters said they believe that Facebook has suppressed content related to the recent violence in the Middle East. The social media giant blamed technical issues for affecting the way users share information.

During the fierce fighting between Israel and Hamas in the Gaza Strip in May, many people expressed their views on the conflict on social media.

The former biomedical engineer turned chef Reem Ahmed is one of them. The social media influencer from Toronto told CBC News that once she started posting information about the violence last month, she noticed a “significant” drop in her online interaction with fans.

“My voice was basically blocked,” she said.

Ahmed has 49,000 followers on Instagram, and she is used to seeing 5,000 to 6,000 views in her stories. However, once she started posting about the deaths in Gaza and providing humanitarian aid to the Palestinians, this number suddenly dropped below 100.

“What does that mean?…It means that my engagement is dead because I chose to talk about some humanitarian and important things?”

Bissan Daoudi, a Palestinian living in Toronto, told CBC News that she had experienced something similar, albeit on an insignificant Instagram post. In 2019, she visited her husband’s family in the West Bank and shot some videos in the area.

She then posted these videos on her Instagram profile, categorized by country/region. One is labeled “Palestine/Jordan, 2019”.

Last week, she opened her profile and was surprised to find that these stories had been deleted from her highlights.

“I’m really frustrated. I just don’t understand why they delete such things,” said Dao. “There is no political overtones there, and they have no right to remove my highlights from my story.”

Facebook said in an email statement that “an error temporarily restricted viewing content on the Al-Aqsa Mosque hashtag page,” and some pro-Palestinian commentators have been using it to post about the violence last month.

“We know that there are several issues that affect people’s ability to share on our apps, including technical errors that affect Stories around the world,” a Facebook spokesperson said.

“Although these problems have been resolved, they shouldn’t have happened in the first place. We apologize to those who feel that they are unable to attract people’s attention to important events or that they are deliberately suppressing their voices.

“This was never our intention-we also don’t want to silence specific communities or opinions. Our policy is to give everyone a voice while ensuring their safety on our apps. We are equal Apply these policies regardless of who posted it or their personal beliefs.”

The company did not say whether pro-Israel posts or other Middle Eastern content were affected by the issue.

“We have a dedicated team that includes Arabic and Hebrew speakers. They pay close attention to the situation on the ground. They are focused on ensuring that we remove harmful content and resolve any law enforcement errors as quickly as possible,” a Facebook spokesperson said.

Shadow bans are not as obvious as deleting posts

Some pro-Palestinian activists stated that their posts have been “shadow banned,” which is a way to block online content. Unlike social media companies deleting content, users are not easily noticed.

“You don’t know it’s happening. It’s hard to see or be sure,” Joel said. “But in essence, you will see a decrease in traffic, followers, connections, and people who like something, and/or your content doesn’t appear much in the algorithm.”

He said that this is basically equivalent to a person or algorithm seeing the content or the user is considered to be problematic, so their access to the audience is restricted.

Watch | A symbol of the Palestinian rebellion against the Israeli-occupied Jerusalem neighborhood:

The Palestinians fear that the Israeli government is supporting the plan of the hardline Jewish settlers to move them from the Sheikh Jarrah community in occupied East Jerusalem and end any chance of one day becoming the capital of the Palestinian state. 7:51

Political motivation and “turn down the volume”

The latest round of fighting between Israel and Hamas, the Palestinian militant group that controls Gaza, began last month Escalation of tensions In the Sheikh Jarrah neighbourhood of occupied East Jerusalem, there is a legal battle between Jewish settlers and several Palestinian families threatened with forced evictions.

The Israeli army followed versus The Al-Aqsa Mosque is part of the Holy Land in the Old City of Jerusalem. It is respected by Muslims and Jews. Palestinian protesters retaliated in the Al-Aqsa Mosque compound, and Hamas fired rockets to retaliate against Israel.

A kind Ceasefire After 11 days of fighting, Hamas launched more than 4,000 rockets into Israeli cities. Hundreds of rockets missed and most of the rest were intercepted. Israel carried out hundreds of air strikes on the Gaza Strip, allegedly targeting Hama. Infrastructure.

Joel said that users may have found problems with their posts because social media platforms may want to “turn down” the volume on specific topics or areas.

“They might feel that it’s surpassing the average feed,” he said.

Joel said that political motives may also be at work.

“Of course, this can also be political, depending on the platform and what they are trying to bring to the world,” he said.

This problem is also related to other reasons.Last month, an organization called “Women in Canada” was associated with the Missing and Murdered Aboriginal Women and Girls (MMIWG) movement. They questioned why Their social media posts also disappeared.