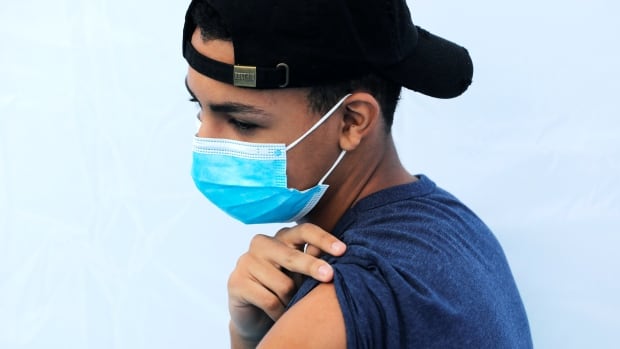 Worried about heart inflammation and the COVID-19 vaccine?This is what we know


Some researchers have recently stated that they believe there is a link between the mRNA COVID-19 vaccine and a small number of people suffering from myocarditis (an inflammation of the heart muscle). Here are the answers to some of the questions people have asked:

“This is not a very common thing,” said Dr. Carolyn Quach-Thanh, a pediatric infectious disease expert and medical microbiologist at CHU Sainte-Justine in Montreal.

When myocarditis occurs, it is usually after various types of viral infections, from the common cold to gastrointestinal diseases. As part of the body’s immune response, the virus can cause inflammation of the heart.

Usually, myocarditis is not serious and will go away on its own after infection.

In many cases, nothing can be done. “You have to wait for it,” Quach-Thanh said.

In rare cases where inflammation affects the heart’s ability to pump blood, treatment may include anti-inflammatory drugs or steroids.

What are the symptoms?

Some people didn’t notice it at all. But according to Dr. Peter Liu, a cardiologist and chief scientific officer of the Heart Institute at the University of Ottawa, the most common symptoms include:

Where does the theory of vaccine links come from?

It is difficult to determine whether the few people who develop myocarditis after receiving the Pfizer-BioNTech vaccine will develop it, or whether it is caused by the vaccine.

last week, The Israeli Ministry of Health announced A study it commissioned convinced them that there was a “possible link” between receiving a second dose of the vaccine and developing myocarditis. Research so far has focused on Pfizer vaccines, not Moderna vaccines, which are also mRNA vaccines.

Israeli officials said that of the more than 5 million people who were vaccinated, 275 cases of myocarditis were reported between December 2020 and May 2021—mainly men between the ages of 16 and 30.

The Israeli government says this frequency is rare and most cases are mild.

Pfizer stated that it is aware of the results of the Israeli investigation, but does not believe that a causal relationship has been established. The company said that the incidence of myocarditis after vaccination is not higher than the normal incidence in the general population.

Health officials in the United States are also monitoring the frequency of myocarditis after vaccination.

Who is most affected?

Based on research to date, male adolescents and young men seem to be most likely to develop myocarditis after vaccination-although this is still very rare in this group.

Liu said that this is consistent with general myocarditis. He said that regardless of the cause, men are about twice as likely to develop the disease as women, and they are usually very young.

Why does the vaccine cause myocarditis?

The currently available mRNA vaccines, including Pfizer-BioNTech, have evoked a strong immune response, “that’s why they are so protective [against COVID-19],” Liu said.

In addition, young people tend to have a stronger immune response. When they receive the second dose of vaccine, their immune system is already ready from the first dose.

Therefore, in rare cases, an “overactive” immune response may occur, which can trigger inflammation around the heart, he said.

Will Canadians get myocarditis after being vaccinated?

Public Health Agency of Canada and Health Canada said they are watching closely Myocarditis monitoring report, But has not yet seen a clear connection with mRNA vaccines.

Spokespersons from the two agencies said in an email to CBC News: “The incidence in Canada is not higher than expected by the general population (outside the scope of the vaccine).”

Cardiologist Liu said that the information he has seen so far indicates that myocarditis caused by mRNA vaccines does occur, but rarely occurs.

In addition, it only seems to happen after the second dose, he said.

Liu said Israel may see more cases of post-vaccination myocarditis because it is far ahead of Canada in providing people with a second dose of vaccine.

The delta variant of the more transmissible coronavirus first discovered in India is taking root in Ontario, and officials are racing to get more people vaccinated. Studies have shown that a single dose of vaccine is only about 33% effective against delta variants. 2:03

Quach-Thanh said that this is an advantage for Canada in terms of vaccine side effects monitoring.

She said that because myocarditis is more common among young people, when it’s their turn to get the second dose, other countries, including the United States, should have clearer data on how big the association is.

So should anyone avoid vaccination?

The overwhelming consensus of experts—including the Israeli experts who most firmly stated that it is related to myocarditis—is definitely not.

“The efficacy of the vaccine outweighs the risk,” Nachman Ash, the country’s pandemic response coordinator, told an Israeli radio station.

Canadian experts agreed and pointed out that COVID-19 itself is a serious threat to heart health-so getting an effective vaccine to prevent it is the right approach.

I have heart disease. Should I be vaccinated?

The Heart and Stroke Foundation stated that for people suffering from cardiovascular disease, vaccinations to protect themselves from COVID-19 are particularly important.

Patrice Lindsay, Director of Health System Reform at the Canadian Heart and Stroke Foundation, said: “If you are infected with COVID, your condition will be worse,” noting that the organization has so far found no potential vaccine side effects to prove that someone did not get it. Was vaccinated.

“The risk of rare cases of myocarditis occurs mostly in young individuals with no history of heart disease and can usually resolve on their own,” he said.

“Patients with heart disease are not at high risk.”

So what is the bottom line?

All experts interviewed by CBC News emphasized that Canadians, including teenagers and young men, can be confident that the COVID-19 vaccine is safe and effective.

But they said that it is still important for the public and healthcare providers to be aware of the potential risk of heart inflammation after the second dose of Pfizer BioNTech.

This way, if someone has symptoms and they have recently received a second dose of the vaccine, they will not just erase the symptoms, but should also talk to the healthcare provider. In turn, this information can help healthcare providers diagnose myocarditis more quickly and determine whether any treatment is needed.