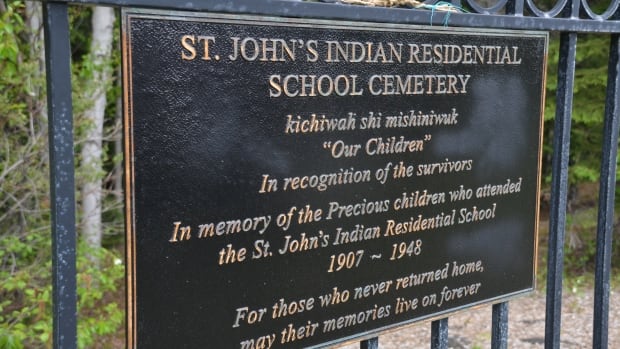 “We will find them”-looking for the lost children of St. John’s Boarding School

Mike Cachagee remembers the feeling of indifference and indifference when he and other students at St. John’s Indian Boarding School buried two little girls on the hillside.

“We looked at this little girl in this box. No one was sad, no crying, nothing,” Cachagee said.

What annoyed him was that he couldn’t remember where the little girls were buried on the hillside.

The cemetery is located on a slope on the highway leading to the small town of Chapulo in northern Ontario. Tall and dense pine trees now stand among the few tombstones.

After the closure of St. John’s Church in 1948, the cemetery was abandoned for many years, but the indigenous communities in the area have always known where it is. Monument of two dozen names.

But Cachagee said that no one is sure whether the children were buried there, the exact location of the graves or whether there were anyone else.

There are also stories about digging graves elsewhere on the old school grounds, and questions about the original location of St. John’s, abandoned more than a century ago and engulfed by forests for a long time.

“In some ways, I was a little worried that they would find a lot of things we never knew,” said Cachagee, who attended three different boarding schools.

“This is an honor we want to do. Before I go to the other side.”

When Adrienne Beaupre walked through the ancient St. John’s cemetery, she wondered if her ancestors were resting under their feet.

Three of her aunts died while attending school in the 1940s, and it is unknown what happened to their remains.

Official records stated that two people died of tuberculosis and one was classified as kidney failure, but Beaupre said that her family had heard that she might have died of a school fire.

“It feels like we are deprived of the love of our aunts and our ancestors and their teachings, you know. A lot of things are lost,” said Beaupre, whose mother only recently started talking about her time at boarding school.

She is happy to find some missing items soon and hopes to be able to use the same ground penetrating radar that showed the remains of 215 children in Kamloops, British Columbia, at the St. John site and other nearby areas.

“Oh yes, my sister and I talked about it and we will find them. We made up our minds,” said Beaupre, who lives in Chapleau Cree First Nation.

“This is not for us, but for them. For our ancestors.”

The family of Nellie Mitchell Ojeebah was “spattered” by the boarding school.

She was sent to Shinwauk boarding school in Sault Ste. When Mary was very young, she was told that she had no parents.

The Brunswick House Native woman later met her parents when she was a teenager, but never really talked to them about her parents’ time at Old St. John’s School.

The 72-year-old said: “I think they throw people away like trash. It’s horrible.”

These days, she thinks of her brother, who studied at Shingwauk as a child and then transferred to a boarding school in Sioux Lookout, Ontario, where he died in 1960.

Mitchell Ojeebah doesn’t know where his grave is.

“He was only 13 years old when he died. They said it was an accident, but I don’t know,” she said.

“My goal is to hopefully do this this year or next year. Give us some end.”

When Marjorie Cachagee-Lee came to the ancient cemetery, she couldn’t help wondering whether there were children buried under every tree, nearby river or highway.

“It feels good for me to come here because I think I am visiting my people and I think they know that I am here,” said the 76-year-old man, who spent most of her childhood at the Shingwauk boarding school .

Cachagee-Lee worries that the federal government is only “investing” $27 million in searches on unmarked graves, and said that this method has failed to bring peace to indigenous communities in the past.

“We need a solid foundation of information about what happened to these children,” she said.

Listen | Looking for children who have never returned home from an Ontario boarding school:

Morning north8:42Looking for children who have never returned home from Chapleau boarding school

The old boarding school in Chapleau has an iconic cemetery, but no one knows exactly how many children are buried there or who they are. Or whether there are other cemeteries in the area. This documentary was prepared by Eric White of the Canadian Broadcasting Corporation. 8:42