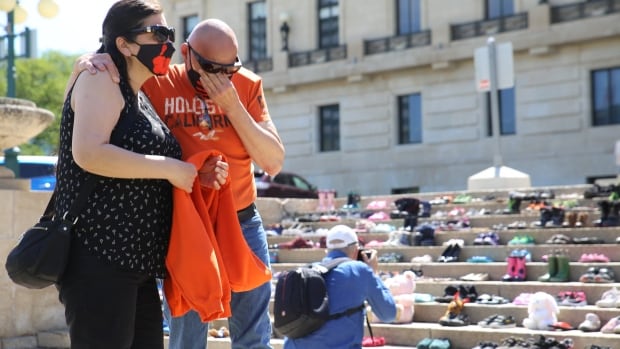 After Kamloops, the politics of aboriginal reconciliation will no longer be the same


Justin Trudeau concluded his speech at the end of the “Attention” debate on Tuesday night that the remains of as many as 215 children might be found in a former boarding school in British Columbia, admitting that the text has limited utility.

“It is not enough to say sorry for past tragedies,” the prime minister said. “Only with our actions can we choose a better path. This is what our government will always strive to do.”

At least on the need to take action, there is a broad consensus.

New Democratic Party leader Jagmit Singh told the House of Commons on Monday: “We are all saddened by the loss of these children, but in order to commemorate their lives, we need to go beyond words and act.”

“I want to act,” Conservative Party leader Irene O’Toole said in his own press conference.

Erin O’Toole shared his thoughts on the report last week that the remains of 215 children were found near a former boarding school in British Columbia. 0:50

There are still disagreements on how to proceed. Naturally, federal political parties have different views on whether the actions of the past six years have pushed Canadians and Aboriginals toward real reconciliation.

But the news from Kamloops and the political response to it confirmed that there is no turning back. Moral and politically, the importance of responsibility is undeniable.

Eventually, media and political attention will continue to shift, but now it is harder than ever to imagine that any government can easily evade responsibility.

Six months ago, the leader of the Conservative Party Photographed by camera Defend the original intention of the boarding school.On Monday, he again dropped these comments-but he also scrambled to stay away His previous support for the statue commemorating John Macdonald When he was informed by reporters that the Charlottetown City Council had just voted through Remove the portrait of the first prime minister from the public square.

Like Singh, O’Toole called on the Justin Trudeau government to speed up its efforts to investigate possible burial sites and explain the children who died in boarding schools— What the Truth and Reconciliation Commission requires.

He also accused the Prime Minister of talking more than acting. O’Toole said that the Liberal government has not done enough to provide clean drinking water to indigenous communities — 107 boiling water warnings have been cancelled, but there are still 52 — and accused Trudeau of “snail-like” Speed” to implement the recommendations of the indigenous communities. Truth and Reconciliation Commission.

Six years ago, when the committee submitted its interim report and recommendations in June 2015, Stephen Harper’s government did not immediately commit to any of TRC’s 94 calls to action. Harper’s Conservative Party said they wanted to wait to read the final report, which was submitted after the election that year.

Trudeau quickly promised that the Liberal government will implement all 94 recommendations.New Democratic Party leader Tom Mulkel said he was Not “realistic” By promising to hunt them down immediately.

To be fair, not all TRC recommendations are applicable to federal jurisdiction. It might be wise for Marchell to suggest not to over-promise.

But these suggestions are now like a bet for Canada’s political leaders and the country itself.

They also provide a way to measure progress-even if they show how difficult it has been to decide how to evaluate the past six years.

When the Liberal Party evaluated its record in 2019, they reported that of the 76 calls to action involving the federal government, more than 80% had made progress-9 of them were described as “fully implemented” and 54 were described In order to “go smoothly”, 13 are in the “early planning stage”.

This CBC’s ongoing statistics on all 94 TRC recommendations It was found that 10 items have been completed, 24 items are in progress, and 38 items have proposed solutions-while 22 items have not been resolved.

‘We must do better’

But the Yellow Head InstituteThe Aboriginal-led research center at Ryerson University believes that progress can only be measured by how many calls to action have been fully implemented. It said only eight reached this standard last year.

“I think our government has done a lot, but we must do better,” said Nathaniel Erskine-Smith, an independent-minded Liberal MP. It’s his turn to speak in the debate on Tuesday night.

Since the report from Kamloops last week, members of Congress have agreed to fast-track two government bills in response to the TRC: C-8, a change in citizen pledge to recognize treaty rights, and C-5, a settlement.

Another Bill C-15 currently under consideration by the House of Representatives will require the government to ensure that Canadian laws are consistent with the United Nations Declaration on the Rights of Indigenous Peoples.Conservatives still exist Oppose the legislation.

After Tk’emlúps te Secwépemc First Nation in BC announced the discovery of an unmarked cemetery in Kamloops, Stephanie Scott, executive director of the National Truth and Reconciliation Center, called for the preservation of the former boarding school site One of the people. 8:02

“What else can I do to settle?” Trudeau asked aloud at a press conference on Monday. “Much.”

In the next four minutes of answering, Trudeau used the phrase “we need” a dozen times.

Although Trudeau reminded reporters this week that it must cooperate with the indigenous people to take action, the government now has reasons to ask whether it should speed up or take further action. Impatience makes sense.

But now it’s hard to imagine that the next prime minister (no matter who it is) will face less pressure and need to do more. It is almost impossible to go backwards now. What the Liberal Party has done in the past six years can at least be regarded as a new bottom line.

Singh called on the government to “speed up” the pursuit of the truth and reconciliation committee’s call for action, and told the House of Representatives on Tuesday that only “lack of political will” hindered their implementation. O’Toole said that MPs should thank the children who died in boarding schools “to redouble their efforts today to achieve reconciliation and cure.”

But even if these rhetorical signs are not put down this week, there will still be thousands of pairs of children’s shoes on temporary monuments in cities and towns across the country.

Before this week, many Canadians knew very little about the pain and suffering of this country in the past and how it affected it now. It should be harder to ignore now.