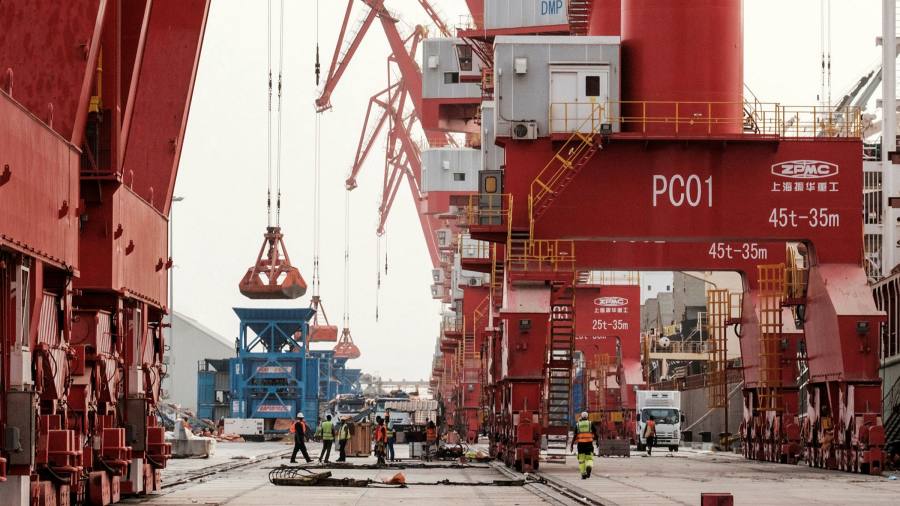 Abdillahi Adawe Sigad, head of SGTD (Société de Gestion du Terminal à conteneur de Doraleh), said with satisfaction: “The ship arrived this morning and everything is done. It will set off for Jeddah tonight.”

Such efficiency means that Djibouti’s goal of emulating Singapore to become a leading maritime trade center is achievable.

“Our dream is to become a new Singapore,” said Sigad, who had worked in Panama. Transit Trading Station.

According to the new global container port performance index, World Bank and IHS Markit, The port is the most efficient port in Africa, measured by the number of minutes each container moves. “In terms of capacity building, investment is needed and cooperation is needed, but we are on the main traffic axis,” Sigad said.

Djibouti is a small country of barren mountains and deserts, located in the Mande Strait on the northeastern edge of Africa. This is where 30% of the world’s shipping passes through a choke point on the way to the Suez Canal and the Red Sea.

“People ask:’Why is this small country developing so many ports?’ Because there is a demand,” he added. “We are attracting more and more transshipments.”

Sandwiched between Ethiopia and Eritrea, this self-declared independent country Somaliland Because of these ports, Djibouti has become the key to global trade. Its economy is expected to grow by 7% this year, making it one of the fastest growing countries in Africa. In the past 15 years, the country has been trying to use its advantages and geographic location to become an international trade and logistics center.

Carl Lorenz, managing director of East Africa, AP Moller-Maersk, the world’s largest container shipping group, believes that Djibouti’s six ports handle approximately 1 million containers each year and are “one of the most productive terminals in Africa”.

Djibouti, regarded by analysts as a stable anomaly in the unstable Horn of Africa, has recently established a sovereign wealth fund for domestic investment, aiming to provide approximately $1.5 billion in funding for commercial activities over the next ten years.

In the past 10 years, Djibouti has attracted approximately US$4 billion in investment—from China, the Gulf countries, and the United States, among others—into ports, oil and gas terminals, free trade zones, and 750km railway line Each time it can deliver 2,600 tons of wheat and fertilizers and 110 containers to Ethiopia.

Dawit Michael Gebre-ab, senior director of strategic planning for the Djibouti Ports and Free Zones Authority, explained that as an important transshipment point, Djibouti “services most ports on the east coast of Africa, all the way to Durban in South Africa.”

In addition, such a strategic location makes Djibouti the location of a military base, earning $125 a year from total rents in the United States, China, France, Japan, and Italy. As a former French colony that became independent in 1977, Djibouti has a population of nearly 1 million and also provides an important lifeline for landlocked countries. Ethiopia and its rapidly growing population of 114 million.

Why does this small country develop so many ports?Have requests

Ethiopian truck driver Birhanu Redai loads steel coils in the port of Tajura across the bay from Djibouti. He said: “Without Djibouti, there would be no Ethiopian trade.” His truck will go home on the newly paved road corridor.

However, this is not a completely smooth progress.Three years ago, Djibouti Seized the Red Sea container port of Doraleh from DP WorldAfter a dispute with the Dubai port operator. Sultan Ahmed bin Sulayem, chairman and CEO of DP World, stated that Djibouti’s actions were illegal and took it to court.

But Hardy countered that the goal of DP World is to control Djibouti’s coastline. And, if anything, Djiboutians believe that the battle with Dubai has strengthened their country’s ambitions.

The historic port in the center of Djibouti is developing into an international business district with hotels, terminals and real estate projects, and the Djibouti International Free Trade Zone is already in operation.

More stories in this report

The Damerjog Industrial Development Free Zone in Djibouti is under construction to serve petrochemical projects and heavy industry. There is also a livestock terminal-including camels-a shipping line, a ship repair yard and a liquid bulk port.

Recalling that Singapore was once a British military camp, Panama was a protectorate of the United States, and Djibouti was a French garrison. Finance Minister Ilyas Moussa Dawaleh said that Singapore’s ambitions are not far-fetched.

“We have the same characteristics as Singapore, and then we have some things in common with Panama,” he said. “Some are unique to Djibouti, but … the world is moving in the direction of trade and services.”