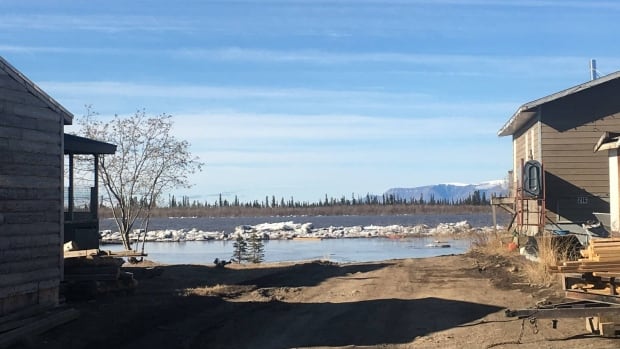 As the floods rise, Aklavík in the northwest region declares a state of emergency


According to an overnight statement issued by its mayor and council, the city of Aklavic, New Hampshire declared a state of emergency when water began to flow toward the garbage dump in the small village.

The statement said that residents will begin to be evacuated from 9:30 am to 10:30 am local time on Sunday.

This remote community has about 600 people and has been under flood surveillance for about a week. It is the latest of several communities in the Northwest Territories affected by the historic flooding of the Mackenzie River caused by the spring rupture.

Small villages are located on the banks of the Peel channel, which is fed by the Mackenzie River further upstream.

Mayor Andrew Charlie told CBC News on Sunday morning that the water level had risen to 16.2 meters, the same height as the last major flood in 2006. According to the Northwest Territories government, this is 1.1 meters below the highest record ever.

He said: “Currently the water is still rising.”

Charlie said residents will begin to be voluntarily evacuated to Inuvik, about 55 kilometers northeast of Aklavík. In winter, the two communities are only connected by ice roads.

The mayor said: “I don’t believe everyone will leave.” “Most people want to stay here and protect the things in their yard.”

Allen Kogiak, who lives in Akravik, said that unless the situation gets worse, he does not plan to leave. But his 80-year-old mother is being evacuated.

He said: “I think it may be one of the first flights.”

Kojak said: “I feel hopeful at the same time, but also anxious.” He added that this is the third time he has experienced a flood.

He said: “This year’s floods are different to me, different from other floods.” “Everyone is worried” but calm.

The mayor said that the water has damaged several roads in the community, including access to garbage dumps and sewage lagoons. However, the water and sewer trucks are still in service on Sunday morning.

He said: “They will keep trying until they feel that it is not safe to provide services in the community.”

Charlie said that due to past floods, most houses were built on platforms not far from the ground.

He said: “The water has reached several houses…their stairs and so on. They can still enter the house.”

“The danger is our fuel tanks. They may tip over. We have a few sewer tanks on the ground. Sitting on the ground, they will be able to float around and blow up people’s houses.”

He said another big question is whether the water will flood the airstrips in small villages.

“If all this is done underwater, it will be impossible for a plane to land in Aklavík, which will make it more difficult.”

As of Friday night, about 26 elderly and vulnerable groups have been evacuated from their homes.

Charlie said: “Everyone is on high alert.” “But other than that, we have to go through it every year, and we will continue to do so. We are ready.”