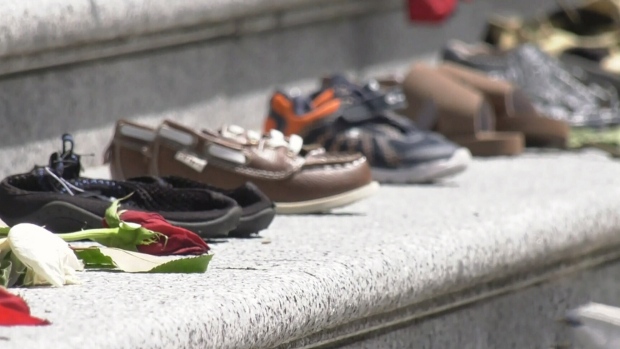 Kamloops Boarding School: Asked to be held accountable after the bodies of children were found

The Tk’emlúpste Secwépemc First Nations announced Thursday that the remains of 215 children had been found in the site of a former residents’ school. They were spotted using ground penetrating radar during a long weekend on Victoria Day.

Gulgiit Jaab, from Haida Nation, told CTV News in Vancouver on Friday that she went to a boarding school near Quesnell, BC

Regarding the news that Kamloops discovered, she said: “Like many of our survivors, we were shocked. When you heard this news, it was very devastating, very devastating. I cried, you know, Because that might be one of us.”

Jaab held a commemorative event in front of the Vancouver Art Gallery on Friday night, putting 215 pairs of children’s shoes on the steps. She talked passionately about what she thought was about to happen next.

Some history of the school has been recorded National Truth and Reconciliation Center. According to the archives, the school principal stated in 1910 that the government did not provide enough money to properly feed the students. In 1924, part of the school was destroyed by fire.

Tk’emlúpste Secwépemc First Nations is now working with the Royal Museum of British Columbia to see if there are other death records.

Rosanne Casimir, the head of the band, told CTV News on Friday that as far as her community knows, the deaths of these children are undocumented.

Mary Ellen Turpel-Lafond is the director of the History and Dialogue Center of UBC Indian Boarding School. She said that the entire boarding school system violated human rights.

Turpel-Lafond said: “The human rights aspects of this aspect have not yet been fully considered, and there is still a lot of work to be done here to solve the remaining problems of these schools.” “A mass grave is a crime scene, and a mass grave is a serious problem. Where there is evidence of human rights violations.”

She said that the Canadian government needs to have an “appropriate framework” to deal with the discovery of graves on the site of residential schools.

Rumors in the cemetery

Eighty-seven-year-old Emma Baker is a student at Kamloops boarding school. She said that there are always “rumors” about the cemetery.

Baker told the CTV News Channel on Saturday: “There is a big orchard there. We used to make up stories about the cemetery in the orchard.” Know that it is true.”

When asked about the feeling of going to school there, Baker replied: “It’s like being in prison. We are not allowed to go anywhere. If our family wants to visit, they can do it once a week.”

Baker said the apologies from all levels of government “have no meaning,” adding that she wants people to know about the student’s experience.

She said: “The pastor and the nun are very quiet. I hope the whole world knows what we have gone through.”