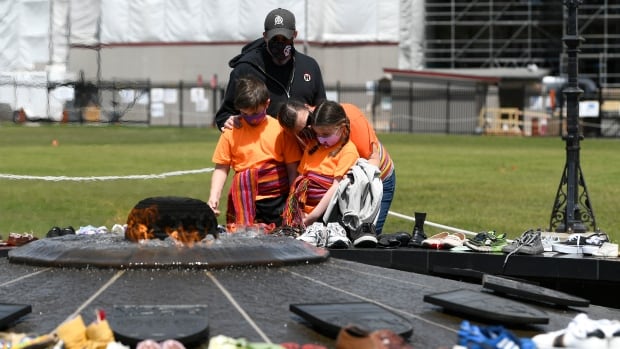 
Warning: This story contains some details that bother some readers.

Former Senator Murray Sinclair said in a statement on Tuesday that Canadians should prepare for the discovery of a site similar to the former boarding school in Kamloops, British Columbia, where the death of an estimated 215 children was found. remains.

He said in a statement: “We submitted a proposal because it was not within the scope of TRC’s authorization, and the request was rejected.” “We have done what we can to a large extent, but it is not as long as we need it. The investigation is still far away. Now we have seen a lot of evidence of child deaths.

“We know that there are many sites similar to Kamloops that will be exposed in the future. We need to start preparing for this.”

Six years ago, after a long investigation of boarding schools, TRC issued 94 calls to action. It made six recommendations on missing children and cemeteries.

The committee called on the federal government to work with churches, Indigenous communities, and former boarding school students to “establish and maintain an online register of boarding school graveyards, including, where possible, drawing a map showing the location of deceased boarding school children.”

Sinclair said he has been receiving calls from boarding school survivors since it was discovered last week. “Hundreds of calls are often just for crying. Not only can I hear the pain and pain, but I can also hear the anger that no one believes in the stories they tell,” he said.

“I can also hear their feelings. They have lost some hope. Maybe those children who have not returned may still be found. They now know that this may not happen.”

Sinclair said it is important to continue the investigation to get a more complete picture of what is happening in boarding schools across the country.

He said: “We need to ensure that treatment plans and foundations are developed to help survivors collect and share their memories and stories.”

Sinclair’s full statement is as follows:

I would like to take this opportunity to talk to you about the discovery of bodies at the Kamloops Boarding School in British Columbia, Canada in the eyes of the public.

When I was asked to chair the truth and reconciliation committee, I thought I knew exactly what would happen. I think that by listening to what the survivors told us and recording their stories, we can discover what is happening in the school. I took on that part of the job frankly and honestly, and I think I understood very well what they were going to tell us.

But the survivor’s story proved terrifying. One of the most common stories we hear comes from survivors who talk about children who died in school and the deaths they witnessed. As always, we hear about their loneliness and separation from their families-how they have lost so much.

For me personally, one aspect that really proved to be very shocking about boarding schools is the stories we started to collect about children who died in school. Among the children who died, sometimes deliberately, in the hands of other people who died there, and so many.

We did not expect this to be part of the work we are doing. We ask the government to allow us to conduct a more comprehensive investigation of that part of TRC’s work in order to explore on behalf of the survivors and the Canadian public. We submitted a proposal because it was not within the scope of TRC’s mandate, and the request was denied. Therefore, we have done what we can to a large extent, but we are still far from where we need to investigate. Now we see a lot of evidence of child deaths.

We know that many websites similar to Kamloops will be exposed in the future. We need to start preparing for this.

Survivors and generational survivors need to know this information for the whole of Canada to understand the truth about this experience.

Since the truth of the Kamloops incident was exposed, I have received calls from survivors. Hundreds of calls, often just to cry. Not only can I hear the pain and pain, but I can also hear the anger that no one believes in the stories they tell. I can also hear their feelings, they have lost some hope, maybe those children who have not returned may still be found. They now know that this may not happen.

My heart is with the survivors, the children and families of survivors who have never returned. I know this is a difficult time. But we must stick to our investigation, and we must know what happened in these schools. We need to make sure that we have a treatment plan and foundation to help survivors collect and share their memories and stories.

I pray for all of you and hope that you can find a way to move on in a good and healthy way.