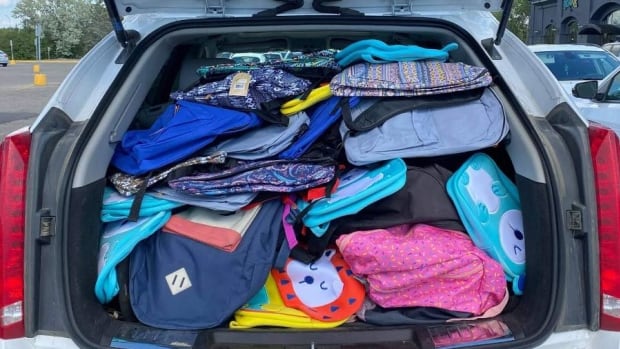 Hundreds of backpacks will be placed in Sask.The discovery of unmarked graves marked by the legislature

The organizer Prairie Crowe hopes that the 751 backpacks displayed in the Saskatchewan legislature on Canada Day will provide a vivid example for the province. Recently discovered unmarked grave At the former Marieval Indian boarding school.

“I think the number, 751, is consistent for many people,” she told CBC News on Monday.

“[It’s] Just to symbolize them and display the numbers…just to create a visual impact. ”

Crowe is a community advocate and activist who grew up in Piaport First Nations. She is collecting old or new backpacks and other school supplies for the commemorative event.

Crowe’s efforts were triggered by the results of a recent investigation in or near the former boarding school.

In May, the Tk’emlúps te Secwépemc aboriginal in British Columbia announced that they had discovered what is believed to be Unmarked cemetery The remains of children near the site of the former Kamloops Indian boarding school.

Last week, Cowessess First Nation announced the preliminary results of a ground penetrating radar search of the site of the former Maryvale School that operated from 1899 to 1997, which is located approximately 140 kilometers east of Regina.

It said that 751 unmarked graves had been found.

Indigenous children are forced to attend boarding schools as part of a structured plan Truth and Reconciliation Commission description As “a far-reaching system, the federal government tried to use it to regulate the lives of indigenous people.”

The backpack is not Crowe’s first attempt to highlight recent discoveries. After Kamloops’ discovery, she previously placed hundreds of pairs of shoes on the steps of the legislature.

After Marieval found out, people asked her if she was planning another operation.

As of Monday morning, through donations, Crowe has been able to collect about 150 backpacks.

Since she is still asking how they can help, she hopes to receive more information.

“I don’t know whether we will reach our goal, but we are definitely working towards it,” Crowe said.

After being placed by the legislature, the goal is to donate backpacks and supplies to community organizations, which will distribute them to families and children who need them in the reserve or downtown Regina in the upcoming school year.