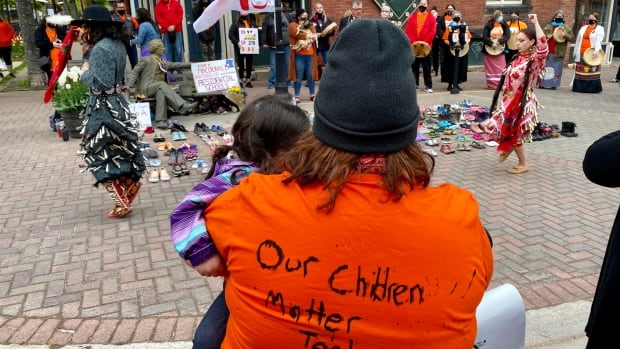 A few days after reporting the remains of children, Trudeau said that boarding school survivors will receive more help


Warning: This story contains some details, some readers may feel uneasy

Canadian Prime Minister Justin Trudeau said that after the heartbreaking report of the discovery of child remains in Kamloops, British Columbia, more support will be provided to boarding school survivors

Tk’emlúps te Secwépemc First Nation said on Thursday that preliminary results of an investigation into the site of the former Kamloops Indian boarding school found the remains of 215 children.

What those federal support will look like is unclear. Trudeau said that he will meet with some of his cabinet members later today to discuss the next steps to assist survivors and the community.

“People are hurting and we have to help the survivors,” he said before announcing the black entrepreneurs this morning.

“Unfortunately, this is not an exception or an isolated incident. We will not hide this. We must admit the fact. Boarding school is a reality, and this is a tragedy that exists in our country, and we must have it. “

The spokesperson declined an urgent debate

After the news came out last week, the Liberal government is facing increasing pressure and needs to announce specific steps.

“Our hearts are with the families and communities affected by this tragic news,” Royal Aboriginal Relations and Northern Affairs Minister Carolyn Bennett said at today’s Senate Committee hearing. “Once you know the truth, you can’t help but know the truth.”

“Our government will continue to work with communities to develop culturally appropriate methods to identify these children, find cemeteries, and commemorate and commemorate those who died or disappeared in these schools.”

This Indian Boarding School Survivors Association (IRSSS) called on the federal government and the Roman Catholic Church to take action.

“Blessings and prayers can only end here,” Angela White, executive director of IRSSS, said on Friday.

The Conference of Catholic Bishops of Canada (CCCB) issued a statement on Monday calling the discovery of the remains “shocking.”

“It has rekindled the trauma in many communities on this land. Respect for the dignity of lost children requires that the truth be revealed,” said Richard Gagnon, president of the organization.

“As we see the pain and suffering of the past more and more clearly, the bishops of Canada pledged to continue to walk side by side with the indigenous people of the present to seek greater healing and reconciliation for the future.”

New Democratic Party leader Jagmit Singh is seeking an urgent debate in the House of Commons after discovering the bodies of 215 children at the site of a former boarding school in Kamloops, B.C. 4:12

After the end of the parliamentary business that day, Liberal MP Mark Geretsen’s motion to hold a recorded debate on Tuesday was passed unanimously in the House of Representatives.

Singh-who appeared visibly shaken and choked at today’s press conference-also called on the federal government to search the premises of other former boarding schools.

Singh told reporters at a press conference in Ottawa this morning: “It is not enough for the Federal Liberal government to make symbolic gestures.”

“This is not the last site; there are many other sites to find. Indigenous communities should have a sense of justice, because every such site has been discovered.”

Watch: Erin O’Toole reacts to reports of human remains at the site of a former boarding school

Erin O’Toole shared his thoughts on the report last week that the remains of 215 children were found near a former boarding school in British Columbia. 0:50

Tory leader Erin O’Toole said the discovery of these graves “is a heartbreaking reminder of the suffering of indigenous children, their families and communities in boarding schools.”

O’Toole said he will write to Trudeau, asking him to “take immediate action to resolve” the “unspeakable discovery, and support the indigenous communities and our country to mourn.”

The Conservative Party leader said that he hopes that the federal government will speed up its efforts to resolve the parts of the truth and reconciliation commission’s final report that involve missing children and burial information.

O’Toole said: “The Conservative opposition will support swift and immediate efforts to close families and communities and have time to recover.”

The Truth and Reconciliation Commission (TRC) issued 94 calls to action six years ago after a long investigation of boarding schools and made six recommendations About missing children and cemeteries.

It called on the federal government to work with churches, Indigenous communities and former boarding school students to “establish and maintain an online registration form for boarding school cemeteries and, where possible, include a map showing the location of deceased boarding school children.”

AFN national director Perry Bellegarde said that there is now evidence that there are a large number of children in boarding schools, and the federal government must follow up in other boarding schools and try to “correct a huge mistake.”

“The survivors of these schools have been saying this for years, but no one would believe that they have these cemeteries. The children are missing, the children are dying and just got rid of,” Bellegarde told CBC News. Power and politics. “No one will believe the story of the survivor.”

Watch: “A huge mistake must be corrected,” said the head of the AFN country:

Perry Bellegarde, Chairman of the Indigenous Peoples Conference, stated that appropriate research and surveys of all boarding schools are being vigorously promoted because “Kamloops is one of the largest schools in Canada, but there are more than 130 boarding schools. school.” 7:48

When asked if he would support these calls, Trudeau pointed to previous funding announcements, but said there was more work to be done.

“I think this is an important part of discovering the truth,” Trudeau said. “I think we will do more… so yes, we will be there to work with the community to solve what they need and what we all need to know.”

Rempel Garner stated that calling for action requires the support of all parties.

She said: “More action is needed. Now is not the time. We must get clues from indigenous leaders across the country.”

“This discovery is a stain on our country.”

Before releasing its landmark 2015 report, the Truth and Reconciliation Commission heard moving and tragic reports of incidents involving indigenous children in boarding schools. Many children are physically and sexually abused in school.

at least 4,100 children Died while attending these schools. TRC Chairman Murray Sinclair said he believes that due to the school’s poor burial record, the death toll may be 5 to 10 times higher.

You can watch the full episode of “Power and Politics” on the following website CBC Gem, CBC’s streaming service.