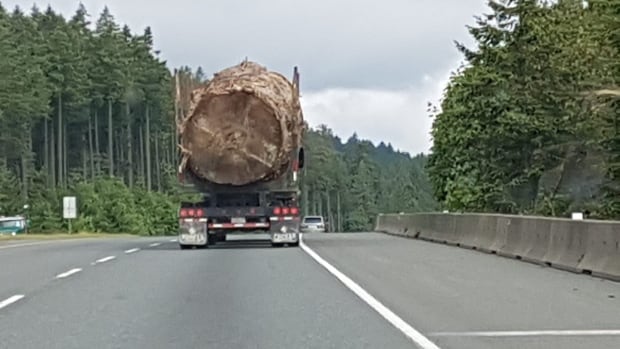 
BC government officials confirmed that a large number of spruce logs hauled on highways this week were felled on North Vancouver Island in 2020, a few months before the introduction of new rules to protect giant trees.

A photo of the tree taken by Lorna Beecroft of Nanaimo on Tuesday was posted on social media all over the world. As of Thursday, it has shared more than 15,000 times on Twitter and 18,000 times on Facebook. The news she received condemned the loss of old trees as far away as Japan, Denmark and Germany.

In a reply sent to CBC News via email, a spokesperson for the Ministry of Forests said that the tree was felled between March and mid-August last year and then transported by Western Forest Products. “In September, “Special Tree Protection November 11, 2020, one month before the entry into force of the Regulations”.

“The government has proposed this regulation to protect oversized trees of all species in the province. Today, according to the regulation, trees of this size are likely to be illegally harvested. If this is the case, a maximum of 100,000 Canadian dollars will be imposed. Fine,” the email said.

On Friday night, Western Forest Products issued a statement on Twitter that it did not harvest or transport logs and would share a report on the matter with the province.

Beecroft said that she took the photo because she was stunned, because she saw a big tree cut down, especially considering the ongoing opposition to logging old wood not far south of Vancouver Island. Protests.

Beecroft said: “It’s actually incredible…too inconsistent.” “I have never seen such a big tree on a truck. That tree may be 1,000 years old. .”

Within a week, this photo shocked the world. During this period, more than 127 people were arrested for trying to protect ancient trees near the Fairy Creek watershed.

Demonstrators gathered near Port Renfrew in an attempt to stop Till Jones’ logging operation. The Royal Canadian Mounted Police has taken action to enforce court injunctions and expelled demonstrators who hindered legal logging in the area.

Beecroft said she was not a “hippie nut” because she was tagged by some people online. She used to work in the logging industry of BC Interior and said that she supports logging but feels that the old big trees need protection.

Beecroft said: “Especially now, people are trying to make sure that we don’t cut down these ancient trees, the sacred cow. This tree is like the tree they fought for and is now driving along the road.” “It’s like Watching someone film the last dodo. We can’t do it.”

The Forest Department clarified that the logs had been transported to a floating log sorting area in the Lower Mainland for storage, were later sold, and were transported to Port Alberni for processing when they were observed on the highway.

The ministry added in an email that since the regulation was cut before the regulation came into effect in 2020, it did not violate the Special Tree Protection Regulations.

According to John Kendall, a registered professional forester at Khowutzun Freegro TreeShelters, wood that can only be produced from trees is valuable, but not only that.

It turns out that huge logs will be milled in Alberni and then turned into guitar parts by Acoustic Woods Ltd., a small, family-owned sawmill that produces musical instrument parts.

Ed Dicks of Acoustic Woods said the log will create about 3,000 guitar soundboards.

Dix said: “We don’t even like those logs.” “They are too big for us to process. But when we buy logs, we don’t necessarily see and choose what we want to buy.”

When she learned about the purpose of the majestic log, Beecroft said that she was happy to at least use it to make something “really great.”