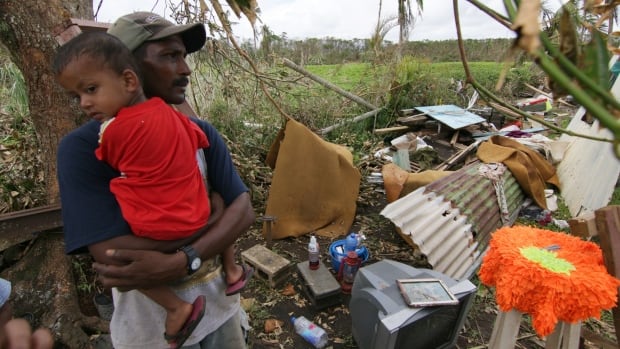 Why Canada needs to think about accepting climate change refugees


Hello, Earthlings! This is our weekly newsletter on all things environmental, where we highlight trends and solutions that are moving us to a more sustainable world. (Sign up here to get it in your inbox every Thursday.)

Why Canada needs to think about accepting climate change refugees

As nations grapple with climate change, critics say Canada is failing to support those forced to leave their homes. We look at climate displacement and explore how to respond. 34:55

As countries around the world wrestle with the growing impacts of global warming — including fires, droughts and rising sea levels — there’s one that critics say Canada is failing to properly consider: climate change refugees.

According to a 2018 World Bank report, by 2050, the planet could see 143 million people become migrants escaping extreme weather, crop failure, water scarcity and other climate-related harms.

An upcoming report from the Canadian Association of Refugee Lawyers (CARL) is calling on the federal government to be better prepared for these shifting migration patterns.

“There’s nothing in the policy that requires immigration officers to specifically turn their mind to the plight of climate migrants,” Shazadi Meighen said in an interview with What on Earth host Laura Lynch. That means any person fleeing the effects of climate change would need to seek refugee status for persecution, based on allowed grounds such as race, religion, nationality or political opinion.

In January 2020, the United Nations High Commissioner for Refugees in Canada called on the federal government to examine its own laws and policies when it comes to refugees, migrants and climate change.

The new CARL report offers several suggestions to address this. For example, it recommends employing the same kind of approach that was used following disasters such as the 2010 earthquake in Haiti and the 2004 tsunami in the Indian Ocean, allowing people to apply for permanent residency on humanitarian and compassionate grounds.

The report also suggests Canada use its much-lauded sponsorship program, which allowed Canadians to sponsor refugees fleeing war in Syria.

In a statement to What on Earth, Immigration, Refugees and Citizenship Canada (IRCC) said it constantly monitors the implications of climate change on migration, and remains steadfast in offering protection to refugees fleeing persecution.

It also says that, in the event of natural disasters, decisions are made on a case-by-case basis and can include expediting refugee applications and extending temporary resident visas for those already in Canada.

David Boyd, the B.C.-based UN special rapporteur on human rights and the environment, has travelled to many regions where climate change is already displacing people. One of them is Fiji, where people were rendered homeless by tropical cyclone Winston in 2016 (see photo above), one of the strongest ever recorded.

“People are now living in really difficult circumstances, basically in slums on the outskirts of Suva, the biggest city in Fiji, and there is no question that, from a science perspective, they are climate migrants,” said Boyd.

He also visited a village named Vunidogoloa, where an Indigenous community had been forced three kilometres inland. “It was heartbreaking to see, because these people for many, many generations have been so directly connected to the ocean for everything in their life.”

Boyd is calling on his home country to do more. Under the UN Framework Convention on Climate Change, there are three central humanitarian obligations: mitigate climate change by reducing emissions; help adaptation efforts by reducing climate-related risks; and address loss and damage where it occurs.

Other international agreements require Canada to help countries in the global south to improve living conditions so there’s less impetus for migration, said Boyd, who is also an associate professor of law, policy and sustainability at the University of British Columbia.

“We love to think of ourselves as a generous and compassionate country. But if you actually look at the amount of official development assistance Canada provides, we’re at somewhere around a quarter to a third of what the Scandinavian nations are currently providing,” said Boyd.

“So we have a long ways to go before we can say we’re putting our money where our mouth is.”

Shazadi Meighen argues that Canada could implement some climate migrant measures quickly because they don’t?necessarily require new legislation, and because climate risk is scientifically quantifiable, it would also be easy for authorities to evaluate the migrants’ claims.?????

What’s more, she says Canadians would likely back the approach.

“The support for immigration has never been higher,” said Shazadi Meighen, who came to Canada as a refugee from Pakistan when she was six. “We’re at a time in Canada when a lot of folks are liable to rally around granting status to individuals who are being displaced by climate migration.”

Jennifer Sanges: “I’d like to know why willow trees weren’t included in your article. They are the first to get their leaves and the last to lose them. In perennially damp areas they stabilize the ground. They live a long time. Most populated areas cannot support such large trees, they are becoming scarcer in parks and residential properties. There must be many more reasons this tree needs to be rediscovered.”

Ian Kerr: “I read your interesting article about the value of trees in reducing CO2 in the atmosphere. As I understand it, mature forests are more or less CO2 neutral, as fallen material decays and is replaced by new growth. Has anyone looked at the option of harvesting lumber and storing it such that it does not decay? Would that provide an opportunity to use mature forests to remove carbon from the atmosphere?”

Lauritz Chambers: “Preserve the old growth by all means and enact sound ecologically based logging systems. However, it seems like a good idea, though, to incorporate as much wood into buildings as possible, put a good fireproof roof overtop that will last a hundred years or more and design buildings to last for centuries. Carbon storage must be No. 1 in the national building code.”

A couple of weeks ago, Emily Chung wrote about services offering takeout meals in reusable containers across Canada. Zero Waste Hub Toronto notes that another reusable takeout meal app called Inwit is set to launch in that city later in May. It added that there are also two Toronto services offering reusable, returnable coffee cups, Reego and DreamZero (through its Muuse app). A similar service called La Tasse is available at cafés in Montreal.

Old issues of What on Earth? are right here.

There’s also a radio show and podcast! Climate change is forcing people from their homes around the world. So how should countries respond? This week, What on Earth host Laura Lynch hears why Canada should accept more climate migrants and do more to deal with displacement within its own borders. What on Earth airs Sunday at 12:30 p.m., 1 p.m. in Newfoundland. Subscribe on your favourite podcast app or hear it on demand at CBC Listen.

***New newsletter alert! Our colleague Peter Armstrong has a newsletter called Mind Your Business, a weekly guide to understanding what’s happening in the worlds of economics, business and finance. Subscribe to it here.

For a long time, the most prominent argument in favour of solar power was an environmental one: that it is a cleaner way of generating electricity than fossil fuel sources like coal and gas. In recent years, as the cost of panels has come down, the price argument has become more persuasive. For many people living in decimated areas of Syria, low price and sheer reliability have made solar energy a preferred power source. As Ben Hubbard recently reported in the New York Times, “solar panels, big and small, old and new, are seemingly everywhere in Idlib province along Syria’s border with Turkey,” and they come in a variety of configurations, from single panels on the ground to more elaborate arrays that can track the position of the sun. Hubbard notes that many in the West still see solar energy as something only the affluent can afford, but in Syria “it is the only viable option for many in a region where the government has cut the power and where imported fuel for private generators is far beyond most people’s means.”

Hot and bothered: Provocative ideas from around the web

The science behind ‘zombie fires’

Fires that smoulder underground through the winter and rise from the earth in the spring to set the boreal forest ablaze are expected to become more common in the north as the climate warms.

In a new study, Dutch and U.S. researchers have, for the first time, found a way to detect and track these fires. The research, published Wednesday in the science journal Nature, catalogued such fires in Alaska and the Northwest Territories between 2002 and 2018 to estimate how much damage they do.

Most wildfires in the North are started by lightning or humans in summer and extinguished by rain and snow by winter. But some “manage to survive winter,” said Rebecca Scholten, lead author of the new study.

Such fires in Siberia made headlines last spring, and were blamed for helping ignite some of the worst wildfires the region has ever known amid a record heat wave. While this type of fire is popularly called a “zombie fire,” scientists generally refer to it as an “overwintering fire.”

Scholten, a PhD student at Vrije Universiteit Amsterdam in the Netherlands, said this type of fire is tied to the boreal forest for two reasons:

Because they’re so remote, these fires have remained “quite mysterious to us,” said Merritt Turetsky, director of the Institute of Arctic and Alpine Research at the University of Colorado Boulder, who researches wildfires in Canada’s North.

To spot the zombie fires, Scholten and her colleagues examined daily satellite images between 2002 and 2018.

The researchers found that in the Northwest Territories and Alaska, overwintering fires tend to be small and normally don’t contribute much to total fire activity, accounting for less than one per cent of burned area on average.

However, they do have the potential to do a lot of damage. In Alaska in 2008, a single overwintering fire ended up burning 13,700 hectares, or about 38 per cent of the burned area that year, the study reported.

The data suggests that climate change could increase their frequency. That’s because they tend to occur after hot summers and large, deep-burning fires, which are becoming more frequent.

Scholten hopes the information about where and when the fires tend to occur will make it easier to predict where they might be expected and help fire managers spot them early.

Olsen said fire managers already watch for holdover fires, especially in areas where fires posed a threat the year before. But he said the new research provides useful information to help with tracking the fires and predicting them based on weather observations.

Are there issues you’d like us to cover? Questions you want answered? Do you just want to share a kind word? We’d love to hear from you. Email us at [email protected].

Sign up here to get What on Earth? in your inbox every Thursday.