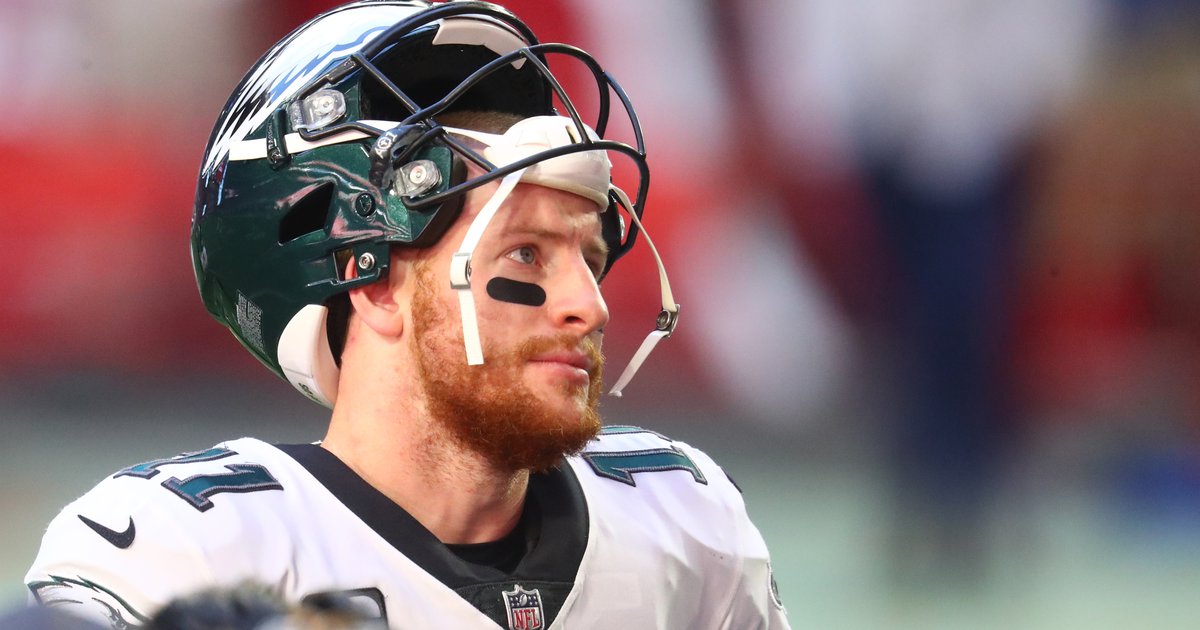 The 10 worst contracts in the NFC East


In 2019, when we published this exercise, there were no Philadelphia Eagles on the list. In 2020, only two Eagles made it, though Alshon Jeffery came in at No. 1. In 2021, three Eagles make the list.

Prescott is probably the most valuable player in the NFC East, seeing as he is the only quarterback definitively worth having as a starter. But he makes the list because the Cowboys put off his contract extension for years, ultimately giving Prescott’s side all the leverage in the world to work out an incredibly player-friendly deal.

On the surface, Prescott’s contract doesn’t seem that bad. It’s four years, $160 million with $126 million in guarantees, including a $66 million signing bonus. He will reportedly receive $75 million the first year of the deal.

After playing on the franchise tag in 2020, Prescott was having an outstanding season when he suffered a serious leg injury and was lost for the year. The Cowboys’ season subsequently went into the toilet. Because Prescott held all the leverage in negotiations, there was reason to believe that he might get more than the $40 million per year he received, so in that sense, this was something of a minor win for the Cowboys to at least keep it at that number.

However, the benefits of this deal to Prescott are in the details, and they are significant. It’s only a four-year deal, which means that as the salary cap increases and quarterbacks push the market even higher over the next few years, the Cowboys and Prescott will be right back at the negotiation table three years from now, when Prescott can score yet another top-of-the-market quarterback contract, since this deal reportedly will not allow the Cowboys to franchise tag him again.

Prescott was a good quarterback from Day 1 in the NFL, earning NFL Rookie of the Year honors in 2016. The Cowboys had an extremely cheap player on a four-year rookie contract at the most expensive position, by far, in the sport. They squandered that major advantage, winning just one playoff game during that span. Now they’ll have to find a way to build a roster around Prescott, who will have one of the most expensive contracts in the NFL for the foreseeable future.

But beyond that, in between when the Giants agreed upon the financials of the deal with Rudolph and when he actually signed with them, it was revealed that he would need surgery on his foot.

Gettleman on not adjusting Kyle Rudolph’s contract after his foot injury was detected in his entry physical: “We are the Giants. We’re going to do everything with class.”

Gettleman said the team doctors signed off on Rudolph’s foot.

Lol. Yes, “class,” like when they knew Josh Brown abused his wife but kept him on their roster anyway because he was a good kicker.

Yeah, we’re going to do this again.

As we pointed out after the Eagles signed Flacco back in March, paying a veteran backup quarterback anything more than the league minimum (or something close it) was absolutely baffling for a team that has already essentially admitted that they will not be serious contenders in 2021.

Giving Flacco $3.5 million in guaranteed money (with the chance to make as much as $7.5 million) felt like an especially egregious overpay, given that Flacco earned just $1,562,500 on a one-year deal with the New York Jets in 2020, meaning that the Eagles gave him a 224 percent increase in pay after a season in which Flacco went 0-4 as a starter.

The two most common rebuttals to criticism of the Flacco signing were as follows:

In his initial press conference with Philly media, Flacco was asked several different ways about a possible mentorship relationship with Hurts. While Flacco made sure to say that he would support Hurts, he also made it clear to point out that he was there to compete. Can’t blame him. Including the playoffs, the guy has started 190 games over his career. Making the transition to anything else can’t be easy. But certainly, Flacco doesn’t seem to be about that mentorship life in the same way that, say, Josh McCown was.

As for the logic behind the pay increase, sure, we now know he’s healthy, but who cares when he was bad in his four starts last year.

Some know-nothing, know-it-all wannabe salary cap experts have pointed out that Flacco will only count for $1,560,000 on the cap in 2021, not the $3.5 million that was originally reported. Well, sure, he’ll only count for roughly $1.5 million in 2021, but it’s not like the remaining $2 million just doesn’t exist. That’ll count toward the 2022 salary cap, when he’ll very likely no longer be on the team.

Is a $3.5 million guaranteed contract going to cripple the Eagles’ salary cap? No, certainly it will not. However, because many took extreme issue with the initial criticism of this wholly illogical contract, you have to continue to hear about it. Argue about it again here, and I’ll keep cramming it down your throats until I become unreadable. ?

Prior to the start of the new league year, the Tennessee Titans cut Jackson because they didn’t want to pay him $10.2 million for one year on his fifth year option. The Giants subsequently signed him to a three-year deal worth $39 million, which is significantly more money, and for a longer period of time. Had they simply thrown the Titans a seventh-round pick before Tennessee cut him, the Giants could have had him on a less expensive deal with a shorter commitment.

But it’s also the long-term commitment that would scare me as much as the AAV of the contract if I were a Giants fan. After three good years to start his career in Tennessee, Jackson had a weird 2020 season, in which he missed the first 13 games with something of a mysterious knee injury. There were hints that the Titans were expecting him to return sooner.

I’m much more surprised by Dennis Kelly’s release than Adoree’ Jackson’s. I had heard talk that #Titans were not enamored with Jackson during his rehab process. Kelly, on the other hand, while not a star was more than serviceable amid the Isaiah Wilson fiasco.

When he did return for the final three regular season games, plus a playoff game against the Ravens, Jackson did not play as well as he had his first three seasons in the NFL. The Giants were evidently satisfied with Jackson’s explanation for his 2020 season, and his medicals, because again, holy crap that is a big contract for a player with some potential red flags.

Brooks was arguably the best guard in the NFL the last time he played, in 2019. But he has racked up a trio of serious injuries in a short span of time, including two Achilles tears, and he is the second-highest paid RG in the NFL (at a little over $14 million per year) behind only Brandon Scherff, who received the double franchise tag this offseason.

If/when the Eagles trade or release Brooks, which feels inevitable in the next year or two, they are going to take on a big dead money hit. There’s probably a decent argument for Lane Johnson’s contract to make this list as well, for similar reasons.

Collins is a box safety and Washington gave him $14 million/year, lol. He has one INT since his signing, and after he was lost for the season with a torn Achilles in 2020, he was replaced by seventh-round rookie Kamren Curl, who clearly outplayed him. Collins will count for $16,918,750 against the cap in 2021.

To Washington’s credit, Collins is their only player on this list.

It was dumb for the Cowboys to select a running back at fourth overall in the draft, and it was perhaps even dumber to give that running back a six-year contract extension worth $90 million, especially after having the benefit of watching Todd Gurley, David Johnson, and Le’Veon Bell immediately regress after getting their top-of-the-market second contracts. And the dumbest part of it was that they got that running back’s deal done before their quarterback’s.

Elliott has been steadily in decline the last few seasons, and there’s an argument that he was downright bad in 2020, when he had career lows in yards per carry (4.0), rushing yards per game (65.3), TDs (8 combined, rushing and receiving), and yards per target (4.8). He tied his career high in fumbles, with six.

Meanwhile, the odometer continues to rise. Elliott has only been in the league for five years, he’s still only 25 years old, and there is only one RB (Mark Ingram) currently on an NFL roster with more career touches than him.

Lawrence finished the 2017 season with 14.5 sacks, which was tied for second in the NFL. He also had four forced fumbles. The Cowboys then used their franchise tag on him, which he played under in 2018 at $17,143,000. His production dipped that season, as he had 10.5 sacks and two forced fumbles.

The following offseason, in 2019, the Cowboys tagged him again, which would have cost them $20,571,600 for the 2019 season. Lawrence was not happy about getting the tag two straight seasons, and he used his injured shoulder, which required surgery, as leverage. What does that mean? Well, he refused to have shoulder surgery, thus delaying his return to the field, until he and the team agreed to a long-term deal.

Jerry Jones and Co. caved, and Lawrence was rewarded with a five-year contract worth $105 million, making him the second-highest paid edge rusher in the NFL (on an “average per year” basis), behind only Khalil Mack. His cap numbers will be as follows the next three seasons:

In the two seasons since he signed his deal, Lawrence has 11.5 sacks. There are 50 other players with at least 11.5 sacks over that span:

On a side note, Giants fans, the new Leonard Williams deal reminds me a lot of the Lawrence deal.

In 2018, the Giants made Solder the highest-paid offensive lineman in the NFL. He was fine for one year, but in 2019 he was at least partly culpable, by my count, for at least 19 sacks last season, and seven (!) forced fumbles, shown here. I feel bad for including him on this list, because his play was no doubt affected by his young son’s struggle with kidney tumors. In 2020, he made the easy decision to opt out to tend to his home life.

At the time Wentz re-upped with the Eagles on his new four-year deal worth $128 million in 2019, there was little criticism, at least locally, so his inclusion here is to some degree of the hindsight variety. And really, nobody could have foreseen him becoming the worst starter in the NFL in 2020. But holy crap, what a disaster that contract extension — and the final days of the Wentz era — turned out to be.

Some links provided in this content are sponsored by Pickswise, a PhillyVoice.com Sports Betting Partner, independently created by PhillyVoice. 21+ Please gamble responsibly.