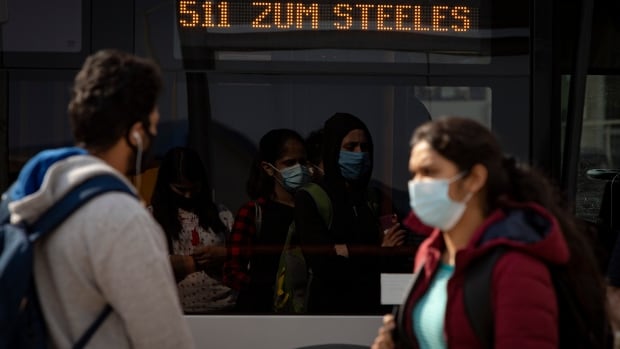 In one of Ontario’s worst-hit areas, COVID-19 has caused harm to essential workers


In the Peel region, which has been hit hardest by COVID-19, workers who are more important than almost anywhere else in Ontario bear the brunt.

CBC News interviewed three people living in the Peel area city of Brampton, Ontario, and talked about the difficulties they and their families faced during the pandemic.

Part-time retail worker in a pharmacy

Mikayla Portelli was saddened by the loss of her grandparents while feeling guilty that they might catch COVID-19 from her.

Portelli is a part-time retail worker in a pharmacy. She has been working during college, with the goal of becoming a nurse. When she got COVID-19 in March, her grandparents lived with her mother, as did her grandparents. They died within a few weeks this spring.

Portelli uses one of the province’s worst-hit zip codes to work and live in Brampton, Ontario. The retail industry accounts for approximately 14% of outbreaks in Peel’s workplaces, while distribution centers account for another 11%. The median age of infected persons in the area is 36 years.

Now, she is doing her best to remember the people who helped her grow while mourning the loss. She tends to plant vegetable gardens carefully in the backyard where they grew up, and suffers in their last days.

“They died alone,” Podley said tearfully. “I’m not there because they don’t allow me to see them, and don’t know that it may come from where I work or people who are too close to me. It makes me sad because people don’t realize how much damage they can cause.”

She said that it has been more than a year since the pandemic and she is still dealing with customers who are too close to her or who are not wearing masks properly. She said that when the product people want is not on the shelf, people may be impatient or angry.

Portelli requires essential items for those who shop and pay attention to the safety of employees.

She said: “In the final analysis, if you make us sick, you may ruin our lives. You may ruin other people’s lives.” “And if you don’t wear a mask, then you may risk your life.”

Kavita Upadhyay worked in a warehouse and had a pandemic to reduce the risk of infection.

Upadhyay wakes up her four-year-old daughter Shanvi at about 10pm every Friday night and drives there. Then, her husband Sushil drove her to work at an 11 p.m. shift because they felt it was safer than letting her take a bus along the route that serves many regional warehouses.

The family lives in a one-bedroom apartment in a tower in one of Brampton’s most affected communities by COVID-19. The postcode starts with L6Y.

From May 2 to 8, the positive rate for her community was 17%, including many high-rise buildings. In the same week, Ontario’s daily test positive rate is between 6.6% and 10%, depending on the day.

According to the Ontario Department of Public Health, Peel’s cumulative number of cases is 6,439 per 100,000 people, while Toronto ranks second with 5,041 cases per 100,000-although Toronto has a higher mortality and hospitalization rate.

Upadhyay said that she feels that her company is taking measures to ensure her safety: there is sufficient personal protective equipment, physical evacuation monitors have been hired, and employees have worn trackers throughout the work process so that if someone is sick Follow up contact at time. But she said she was still stressed when she heard that someone at work tested positive for COVID-19.

She said she was worried that the disease seemed random. Some people were asymptomatic and escaped the disease, while others were seriously ill.

Gurinder Singh Khehra suffered from severe symptoms of the disease and required two hospitalizations. Even now, more than two months after being infected, he is still working while going up and down the stairs.

A bird flu broke out in his wife’s workplace, and the virus spread in the house they shared with their children and their wife’s parents. Their 13-year-old daughter is the only daughter who did not get COVID-19.

Khehra’s symptoms began in late February. He felt weak and the fever prevented him from being controlled by over-the-counter medications, so he went to the hospital and put on a ventilator.

He returned home on March 19, but a few days later, his wife found him in the bedroom and was lifeless.

He said: “My body is almost cold. No breathing, no heartbeat.” “So my wife started crying. My mother-in-law was downstairs, and she ran upstairs. My daughter, she called 911.”

Hera was taken to the hospital and put on a ventilator again. He said that his hands must be tied tightly, because when he enters and leaves consciousness, he will try to pull out the test tube. He had hallucinations, forgot where he was, and at some point thought he had returned to India.

“To be honest, I can’t say these things. When they took me home for the second time, all the neighbors were outside and no one thought I would come back. No one. Everyone came to my wife and they said,’No matter what If God is willing, then accept it.”

Khehra lost 35 pounds, but still moved very slowly. He said that he often had trouble breathing. But he felt that his physical pain had been covered up by the “mental torture” COVID-19 suffered by his family. He said that since the day his wife found him in bed, she could not sleep in their room.

“I think the mental torture is greater than the physical torture. When I come back, my children will feel scared. My son said to me,’Dad, I will be scared.’ When they take me, I will feeling scared.”

Although his health is still affected by the disease, Hehra said he feels very lucky. But he hopes that people will remain vigilant about this virus.

“So this is what I say to everyone, take precautions. If you don’t need to go out, don’t go. Cut the chain. This is very important. Very, very important.”

Watch | Fears of a family after being infected with COVID-19:

Gurinder Singh Khehra talked about the mental stress of his wife contracting COVID. 0:54