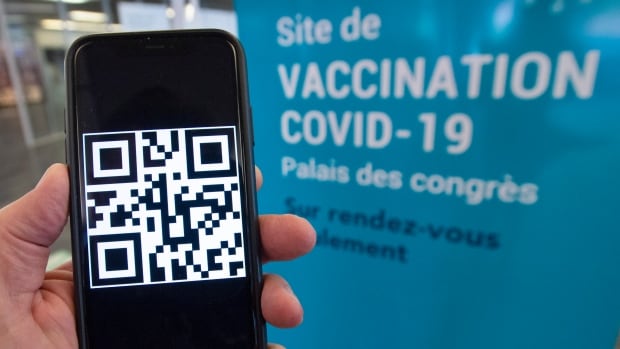 
Canada’s Privacy Commissioner is issuing a warning about vaccine passports, stating that measures must be taken to ensure that Canadians’ personal information is protected.

The federal, provincial and territorial privacy commissioners and the Ombudsman’s Offices of Manitoba and New Brunswick said in a media statement today: “Although doing so may bring substantial public interest, it infringes Civil liberties can only be adopted after serious consideration.”

Health Minister Patty Hajdu told CBC News last week that her government is in discussions with the Group of Seven (G7) allies to implement a vaccine passport that will allow Canadians to go abroad again. travel.

On May 13, Quebec began issuing downloadable QR codes that people can keep on their phones to prove that they have been vaccinated, but it is not clear how to use digital vaccination certificates.

The Minister of Health of Quebec, Christian Dube (Christian Dubé) said that the QR code is a supplement to the paper vaccination documents that have been distributed.

Quebec follows the example of countries such as Israel and Denmark, which have issued digital vaccination certificates that people can use to access events and businesses.

The European Union is developing its own vaccine passport-a digital green certificate-which will enable citizens of EU member states to prove that they have been vaccinated.

The UK said it is developing a plan to adapt its National Health Service phone app (used for accessing medical records, appointment books and ordering prescriptions) to various situations to be used as a digital vaccination and test verification tool.

The Privacy Commissioner said that if the vaccination passport is issued in Canada, measures must be taken to ensure that the highest level of privacy protection is maintained so that personal health information is not disclosed.

The statement said: “Vaccine passports must be formulated and implemented in accordance with applicable privacy laws.”

The Privacy Commissioner said that the government must ensure that there is a legal basis to provide a vaccination certificate. For example, Canadians traveling abroad may need to carry proof because the destination country requires proof.

The commissioners said that companies and governments that plan to require vaccination certificates will need to introduce new laws or modify existing laws to lay the foundation for this requirement.

The commissioners also said that the government should certify vaccine passports necessary for travel or visits to businesses and services.

The statement said: “Although members of the scientific community have indicated that this may be coming, so far, we have not obtained evidence of a vaccine to prevent the effective spread of the vaccine.”

The commissioner said that the vaccine passport should only contain the information needed to prove the vaccination, and should not contain other health information that may be leaked. They said that once a pandemic is declared, or proof of vaccination is no longer needed, passports should be destroyed.

The commissioner also hopes to independently monitor any vaccine passport program and inform Canadians how to use and store their information.