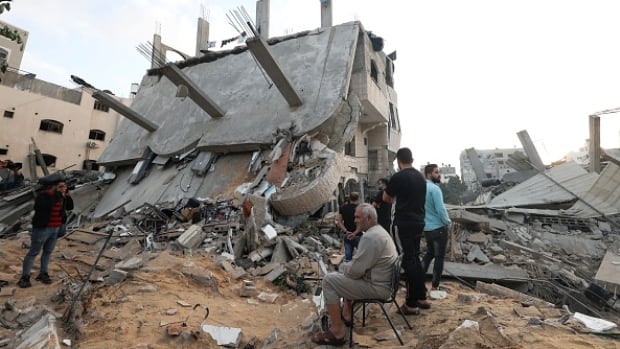 Violence in Israel spreads, and tired Gaza marks the end of Ramadan


Tired Palestinians are preparing to hold a grand feast on Thursday to celebrate the end of the Muslim holy month of Ramadan, as Gaza is ready for Israeli air strikes. After weeks of protests and violence in Jerusalem, community violence broke out across Israel.

Since the Palestinian uprising or uprising in 2000, the latest outbreak of violence in the Middle East has also penetrated into Israel. Arabs and Jewish mobs raged in the streets, brutally beat people, burned cars, and diverted flights from the country’s main airport.

The last three wars between Israel and the militant Hamas rulers in Gaza were largely confined to impoverished and blocked Palestinian territories and Israeli communities on the border. But this round of fighting (like an uprising, beginning in Jerusalem) seems to be spreading everywhere.

Eid al-Fitr is a festival that marks the end of a month of fasting throughout the day. It is usually a festive holiday where families buy new clothes and gather to enjoy a big meal.

But in Gaza, the militants fired one rocket after another, and the Israelis suffered more damage. Israel launched waves of heinous air strikes, emitting thick smoke into the air. Since the launch of the rocket on Monday, Israel has toppled two high-rise buildings after warning civilians to evacuate, which covered up Hamas facilities.

The Islamic militant group Hamas seized power in Gaza from rival Palestinian forces in 2007, urging the believer to mark the community’s Eid prayers in their homes or the nearest mosque, rather than in the open air as traditionally done.

Hassan Abu Shaaban tried to ease the mood by distributing sweets to passersby after praying, but he admitted that “Eid al-Fitr has no atmosphere at all.”

He said: “This is all air strikes, destruction and destruction.” “May God help everyone.”

The Gaza militants continued to bombard Israel with rockets all day until early Thursday. The attack paralyzed the southern community near Gaza, but it also reached Tel Aviv, about 70 kilometers to the north, for the second day in a row.

Watch | Escalation of violence between Israelis and Palestinians:

As the Israeli army and Palestinian militants continued their attacks on the third day, violence broke out in Jewish Arab cities. 4:38

The Ministry of Transport said that Israel has begun to transfer some flights from Ben Gurion International Airport near Tel Aviv to Ramon Airport in the southernmost part of the country.

The footage shared by the Israeli military showed that early Thursday, there was a rocket impact between apartment buildings in Petah Tikva, a suburb of Tel Aviv, which apparently caused a fire. It said the strike hurt the people and caused heavy losses.

“We are dealing with it, sitting at home, and hope everything will be fine,” said Morty Heim, a resident of downtown Bill Yayakov and father of two. “Running to the shelter is not easy. For children, it is not easy.”

The Gaza Ministry of Health said the death toll rose to 69 Palestinians, including 16 children and 6 women. Islamic Jihad confirmed the deaths of seven militants, while Hamas admitted that a senior commander and several other members were killed. Israel says the number of militants killed is much higher than Hamas admits.

A total of 7 people were killed in Israel, including 4 who died on Wednesday. These included a soldier who was killed by an anti-tank missile and a six-year-old child was hit in a rocket attack.

United Nations and Egyptian officials say that ceasefire efforts are ongoing, but there are no signs of progress. Israeli TV Channel 12 reported on Wednesday evening that Prime Minister Benjamin Netanyahu’s security cabinet approved an expansion of the offensive.

United Nations Secretary-General António Guterres condemned the “indiscriminate launching of rockets” from civilian areas in Gaza to the Israeli population center, but he also urged Israel to show “maximum restraint.” President Joe Biden called on Natanyahu to support Israel’s right to self-defense, and Secretary of State Antony Blinken said he was sending a senior diplomat to the area to ease tensions.

Arabs and Jews clash in Israel

The current outbreak of violence began in Jerusalem a month ago. During Ramadan, Israel adopted a severe police strategy. Jewish settlers threatened to expel dozens of Palestinian families, which triggered protests and clashes with the police. The focus is on the Al-Aqsa Mosque, which was built on a hillside and is admired by Jews and Muslims. The police fired grenade at tear gas and demonstrators who threw stones at grenade.

Hamas said it was defending Jerusalem and fired a rocket at the city late Monday, triggering days of fighting.

These exchanges have triggered violent conflicts between Arabs and Israeli Jews in scenes that have not been seen in more than two decades. Netanyahu warned that he was prepared to “use an iron fist when necessary” to calm the violence.

trend18:44Israel responds to Hamas rockets with air strikes, and the death toll rises

The escalating rockets between Hamas and Israeli forces killed dozens of people. We will discuss growing tensions with the Associated Press correspondent Fares Akram in Gaza City; Steve Hendrix, Director of the Washington Post Office in Jerusalem. 18:44

But ugly clashes broke out across the country on Wednesday night. Despite the state of emergency and night curfew, Jews and Arab mobs are still fighting in the downtown city of Lod. In nearby Bat Yam, a group of Jewish nationalists attacked an Arab motorist, dragged him from the car and beat him until he was motionless.

The Israeli military said that in the occupied West Bank, Israel defeated a Palestinian shooting that wounded two people. The Palestinian Ministry of Health said the suspected gunman was killed. No details are available immediately.

His rival has invited a small Islamic Arab party. But the longer the battle lasts, the more likely it is to hinder their attempts to form an alliance.