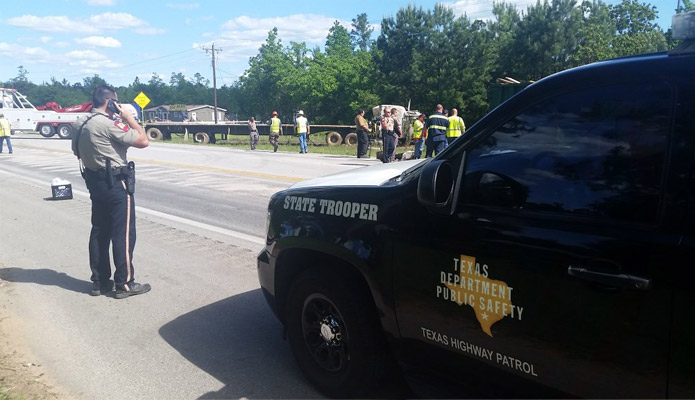 Three people were killed and a fourth was critically injured in a recent 18-wheeler crash in Montgomery County. Reports say the 18-wheeler was hauling lumber when it slammed into multiple vehicles. Two of the victims killed died at the scene. The third, a young mother died at the hospital, and her child was flown to a local hospital with critical injuries.

“MONTGOMERY COUNTY, Texas – A multi-vehicle crash in which three people were killed and a child was critically injured caused a portion of old Highway 105 to be shut down and traffic diverted for much of Friday afternoon, authorities said. A truck driver who allegedly was intoxicated faces charges in the pileup.”

The driver of the 18-wheeler is facing charges of manslaughter and intoxication assault. DPS troopers say he was driving while allegedly under the influence when he rammed his 18-wheeler into multiple vehicles.

“The driver of an 18-wheeler witnesses say slammed into four cars, killing three and injuring a child, is facing intoxication manslaughter and intoxication assault charges, police say. The Department of Public Safety charged Chad Fletcher, 37, whom troopers say was driving while allegedly intoxicated when he crashed into the vehicles.”

The Dangers of Truck Driver Intoxication

Truck driver intoxication is one of the most reported causes of fatal commercial truck accidents in the U.S. According to Texas 18-wheeler crash attorney Amy Witherite “sadly, many truck drivers don’t act responsibly on the road and choose to drive after consuming alcohol. As a truck driver in operation of such a massive, powerful machine on the road, it isn’t safe to attempt to operate a commercial vehicle after consuming any amount of alcohol.”

The Texas personal injury lawyer, who is not connected to the aforementioned case, says that it is important that victims in these matters understand their legal options for holding drunk truck drivers accountable for any damages they incur in a serious crash. Witherite has said in a past publication of the issue “when a criminal charge has been filed or regulatory violation established, it provides evidence supporting those who choose to file civil claims for compensation against truck drivers who are responsible for their damages.”

In addition the attorney has said “there are laws in place that allow victims to seek the recovery of damages from truck drivers who have acted negligently and caused them harm.” Compensable damages include medical expenses, lost income, and pain and suffering.”

Witherite suggests that victims of serious truck accidents, or their surviving family members in the event of wrongful death, seek the advice of an experienced lawyer in these cases to better understand their legal options.

For help with a Texas 18-wheeler crash case linked to drunk driving, contact Eberstein Witherite LLP by calling 1800 Truck Wreck (1800-878-2597) at any time of the day or night.