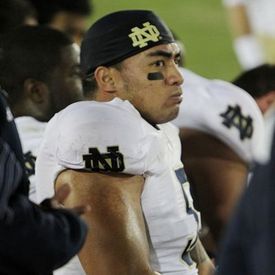 California – The man at the center of a recent relationship hoax involving former Notre Dame linebacker Manti Te’o says he fell in love with the football player. As reported by the Associated Press (AP), the California man, Ronaiah Tuiasosopo, recently spoke about the hoax in an interview for the “Dr. Phil Show,” that is set to air on Thursday.

Tuiasosopo, who purportedly built a fake online persona of a woman Te’o said he fell in love with but never met, and subsequently believed had passed away, developed feelings for Te’o and did not financially profit from the ruse.

Tuiasopopo is quoted by the AP as stating, “I pretty much had this escape of Lennay and this was where my heart had pretty much invested, not just time, but all of my energy went into this… As twisted and confusing as it may be, yeah, I cared for this person.”

He further asserted, “I did all that I could to help this person become a better person, even though I wasn’t getting nothing out of it.”