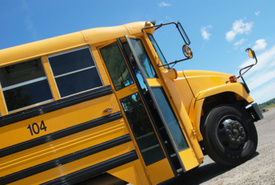 Chesterfield, NJ — A collision between a dump truck and a school bus has left one child dead Thursday morning, February 16, 2012. The fatal school bus accident occurred around 8:18 a.m. at the intersection of Bordentown Chesterfield Road (Route 528) and Old York Road in Chesterfield, reported WPVI.

According to officials, the school bus was transporting Chesterfield Elementary School students along Old York Road when it collided with a dump truck that was traveling on Route 528. The impact spun the bus around, causing the bus to hit its back side on a traffic light pole.

One child, the daughter of a New Jersey State Trooper, was killed in the wreck.

Responding emergency crews transported over a dozen students to area hospitals for treatment of various injuries. Three victims were airlifted, while the others were transported by ambulance.

Local and state police are still investigating the cause of the crash.