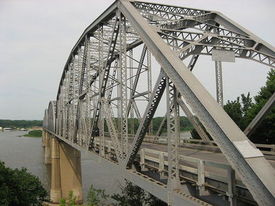 Champ Clark Bridge, IL — Logging equipment fell from the back of a truck on the narrow Champ Clark Bridge and into the path of a motorist, leaving him dead. The fatal automobile accident occurred around 8:15 a.m. Wednesday, December 14, 2011, on the bridge that carries U.S. Highway 54 from Louisiana, Mo., to Pike County, Illinois, reported St. Louis Today.

The Illinois State Police reported that Kyle David Brown, 40 of Lake Saint Louis, was traveling east on the bridge in a 2011 BMW sport utility vehicle, as a Kenneth L. Davis, 50, of Pleasant Hill, Ill., was headed west in a 1992 International tractor-trailer.

A tire on Davis’ trailer of the truck apparently hit the guardrail on the bridge, causing the logging equipment on the trailer to be thrown into the path of Brown’s SUV.

Brown’s SUV hit the logging equipment, which was described as an over-sized forklift, head-on. He did not survive the wreck.

Police ticketed Davis for improper lane use because he left his lane and struck the guardrail. Other charges may follow if the tractor-trailer shows to be too wide for using that bridge.

The Illinois State Police are investigating.