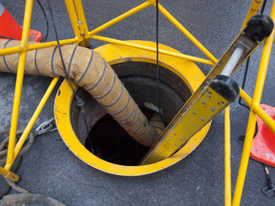 Collin County, TX — One man has died and another is still missing after the workers went down into a 60-inch wastewater collection line. The fatal work-related accident occurred around 8 a.m. Thursday, November 3, 2011 on the 200 bock of Dumont Court in a Collin County suburb, reported NBC Dallas-Fort Worth.

According to officials, two contract workers for North Texas Municipal Water District had gone down into the pipeline to remove a clog, when they were apparently overcome by poisonous gas fumes present in the line.

Neither of the men was wearing respiratory devices at the time.

Rescue crews rushed to the scene and pulled a worker’s body from the sewer pipe. He was pronounced dead.

The second worker is still missing. Rescuers are still searching for the worker, who they believe was swept down the line. They plan to use cameras to look for the man, and search various manholes down the line in hopes of finding him.

“A sewer line is full of poisoned gas,” said John Godwin, Fairview town manager to NBC. “Sewer lines are buried at different depths. The line is likely several miles long. We’ve got to send fire rescue in the hole. They’ll be tethered, and they’ll go in with oxygen as if into a fire.”