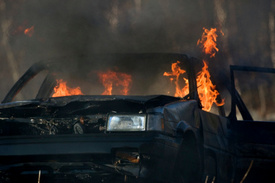 According to officials, the driver of a Honda Accord lost control while traveling westbound on Southeast Green Oaks Boulevard and slammed into a tree in the median at Yaupon Drive.

The impact of the crash was so intense that it caused the car to split in half and erupt in flames. A nearby Arlington police officer noticed the fire and alerted rescue crews.

Responding EMTs pronounced the driver and his brother dead at the scene. A teenage female was rushed to John Peter Smith Hospital in Fort Worth for medical treatment. The teenage girl’s injuries proved fatal at the hospital and she was pronounced dead. Their identities have yet to be released, but officials say their ages were 17 and 21.

Two others, both males, were also rushed to the hospital for treatment of serious injuries.

Officers believe alcohol was a factor in the wreck, after police located a liquor bottle at the scene.

Investigations into the deadly crash are underway.