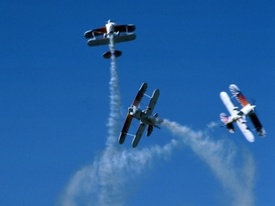 According to officials, it is still unclear what caused the T-28 plane to crash during the aviation demonstration event. The identity of the deceased pilot has yet to be released.

No one on the ground was injured.

CNN iReporter Jennifer Clark said, “We saw a flash of light…and heard the explosion sound.” She said you could see flames and black plumes of smoke coming from the ground.

This is the second fatal air show accident to occur over the weekend. On Friday, a pilot lost control of his plane at the Reno air show, which caused the plane to crash into a crowd of spectators. At this time, the death toll has reach 10, while about 70 others were injured. It is unknown what caused the vintage plane to crash.

Investigations are ongoing in both air show plane crashes.