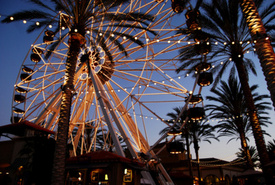 Sacramento, CA — A crane collapse at the Scandia Family Fun Center in North Highlands injured two workers who were performing maintenance on a ride. The work-related accident occurred Tuesday afternoon, August 30, 2011, while working on the 165-foot-tall Scandia Screamer, reported the Sacramento Bee.

According to Sacramento Metropolitan Fire District officials, the men were trying to remove a long metallic arm from the park’s landmark ride, which gives people a bird’s-eye view from two gondolas on both ends of a rotating arm, when the accident occurred.

The workers, who were wearing safety harnesses as required by state and federal regulations, were at the top of the ride’s support beam removing bolts, while another worker operated a crane at the bottom of the ride. Apparently the workers were removing the last bolt when the immense weight from the metal arm being transferred to the crane caused the crane to fall over with the ride’s arm.

Sacramento firefighters just happened to witness the crane fall over while on their way back to the station in Rancho Cordova, and rushed to the scene.

Rescue crews used a ladder with a basket on the end to rescue one of the workers. He reportedly was conscious and had sustained a fractured leg in the crane accident.

The two harnessed workers, who are employees of the park, were transported to Mercy San Juan Medical Center for treatment of injuries.

Investigations into the workplace accident are underway. The U.S. Occupational Safety and Health Administration (OSHA) are also expected to conduct its own investigation into the crane collapse.