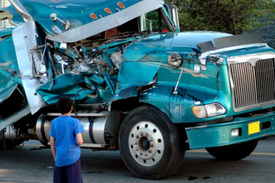 According to officials, a Snyder’s of Hanover snack truck slammed into a box truck that was traveling in front of the Snyder’s truck, sparking the chain reaction crash with two other 18-wheeler Rutter’s trucks.

The impact of the collision threw three people riding in the Snyder’s truck out of the windshield, before two of the victims were run over by the same truck.

Emergency responders were traveling behind the two trucks and watched the crash unfold. The EMS technicians immediately began administering aide to the victims of the wreck.

One victim, identified as Christina Hess, 35, suffered head and hand injuries in the crash. Hess was released from the hospital Saturday night. Ex-wife of Rupert Murdoch accused of abusing him