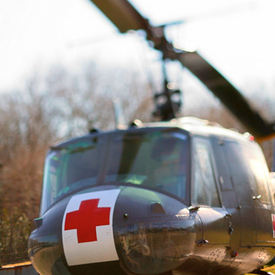 La Monte, MO—Three occupants of a medical helicopter suffered serious injuries when the aircraft went down shortly after taking off from a helipad in La Monte Sunday morning, Dec. 19, 2010. Officials from the Federal Aviation Administration (FAA) are in the process of determining whether electrical and/or engine problems were to blame for the injurious aviation accident, as reported by KMBC.

According to Mariah Durham, a volunteer firefighter who witnessed the medical helicopter crash, “I was on the phone with my mom when it happened. I was, like, ‘Oh my gosh. The helicopter crashed.’ She’s like what?”

Eyewitnesses claimed the helicopter had just taken off from a La Monte helipad to respond to a call and was approximately 200 feet up when the aircraft appeared to lose power.

The unidentified pilot maintained enough control of the helicopter to keep it from slamming into a tank full of jet fuel, as well as a nearby highway.

La Monte police Chief James Ulm credited the pilot for his ability to make a hard landing away from the large fuel tank. “The fact that he could keep it from spinning was amazing. If he had hit that tank, La Monte would be no more,” he said.

The pilot, a flight nurse and an air medic were airlifted to a Columbia hospital to be treated for serious injuries sustained in the medical helicopter wreck. The unidentified aviation accident victims were reportedly listed in stable fair condition.

The FAA is expected to conduct a full probe into the Missouri helicopter accident.