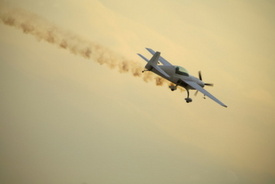 Newport Beach, CA—A small plane crash Sunday evening, Nov. 21, 2010, claimed the lives of three men on board. The triple-fatality aviation accident occurred in a bay surrounded by homes, as reported by MSNBC.

According to Fire Division Chief Paul Matheis, Newport Beach firefighters witnessed a 1986 single-engine Beechcraft Musketeer flying low before 6 p.m. “It flew over one of our stations at about 50 feet… They could tell that there was trouble,” explained Matheis.

Although fire rescue personnel followed the aircraft and eventually found it in Upper Newport Harbor, “It was too late… The three inside did not survive the crash,” Matheis said. The aircraft was reportedly found upside down in shallow water.

Authorities did not identify those killed in the plane wreck.

According to Federal Aviation Administration spokesman Ian Gregor, the plane had departed from Mexico and was en route to Torrance at the time.

Matheis noted that the pilot of the downed aircraft apparently reported problems to air traffic controllers at John Wayne Airport prior to the crash.

Matheis also added that he believed the pilot made an attempt to avoid the bay’s surrounding homes, stating, “If I was guessing I’d say he did a good job of avoiding anything like that.”

Authorities from the FAA and National Transportation Safety Board (NTSB) are expected to conduct a full probe into the deadly California plane wreck.