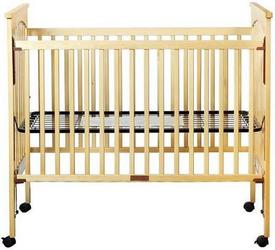 A CPSC news release indicated the cribs’ drop side rail has the potential to malfunction and cause part of the drop side to separate from the crib.

If this occurs, a space left between the drop-side and the crib mattress can pose serious risks to infants or toddlers using the cribs.

The child’s body can get stuck in the space, thus leaving them susceptible to strangulation and/or suffocation.

To date, the company and CPSC have received 18 reports of drop-sides malfunctioning or detaching from the recalled cribs.

While no injuries were reported in connection with the potentially dangerous product, one of the incidents involved a child who became entrapped in the space between the mattress and drop-side.

Three of those occurrences also resulted in children falling from the cribs. Another 154 reports described drop-side hardware breaking during shipment, assembly or use.

According to the CPSC news release, “The recalled cribs are wood with a metal mattress support and have a drop side with external plastic hardware. The cribs were sold in a variety of finishes. A label is attached to the footboard or headboard with the names “Bassettbaby” or “Bassett Furniture Industries, Inc.” as well as the model number, production date and other information. On some older models the manufacturer’s name appears on a separate label… This recall does not include non drop-side cribs.”

The defective drop-side cribs were made available for purchase at children’s product stores and other retailers nationwide, as well as via the Internet, between January 2000 and August 2010. Prices ranged from about $200 to $500.

Consumers have been urged to cease use of the risky drop-side cribs and contact Bassettbaby to obtain a complimentary kit, which will immobilize the drop side. Until the free repair kit has been received, parents have been advised to find an alternate place for their child to sleep.