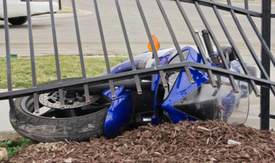 Reports indicated 23-year-old Matthew Hunter Cavey was riding his motorcycle eastbound along East Jarrettsville Road when he lost control around 2 a.m. Upon doing so, his bike hit a curb before crashing into a utility pole in the 100 block of East Jarrettsville.

His motorcycle allegedly slid for approximately 60 feet before coming to a stop. Elijah Cole Kelley, 16, was a passenger on Cavey’s motorcycle when the violent wreck occurred.

Kelly, on the other hand, was airlifted to Baltimore-based Shock Trauma. She reportedly sustained serious injuries in the motorcycle accident.

According to data provided by the National Highway Traffic Safety Administration’s Fatality Analysis Reporting System (FARS) Encyclopedia, 5,312 motorcyclists were killed in U.S. bike accidents during the year 2008. During that year, 91 motorcyclist fatalities were reported in the state of Maryland alone.

Officials are expected to conduct a full investigation into the Bel Air motorcycle crash.