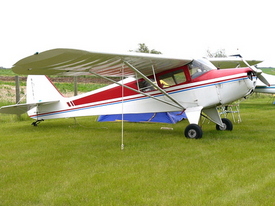 Harrison, ME—Two people lost their lives when the 1946 vintage Taylorcraft plane they occupied crashed into a wooded area in Harrison, Maine. The fatal aviation accident occurred on Saturday, August 14, 2010, though the search for the wrecked aircraft and those aboard it continued until Sunday morning, according to information provided by WMTW.com.

Reports indicated a 68-year-old pilot took off from Limington Airport around 9:30 a.m. and was scheduled to fly into Harrison to retrieve a friend. While the pilot seemingly managed to land at the private Harrison-based airstrip to pick up his 73-year-old friend, as initially intended, family members received no word from the pilot or his/her friend as of Saturday night.

After picking up a signal from the pilot’s cell phone, authorities from the Cumberland County Sheriff’s Office, along with members of the Maine Warden Service, began to search a wooded area located off of Route 35 in Harrison.

While the search was cut short due to a lack of light and dense forestation, officials discovered the downed aircraft at approximately 6 a.m. Sunday. Sheriff’s officials, Maine Warden Service members, Maine State Police (MSP), and the Civil Air Patrol (CAP) helped look for the wreckage.

Cumberland County Sheriff’s investigators seemed to believe the plane might have hit some trees while trying to land in a field in Harrison. Officials have withheld the identities of those killed in the plane crash, pending the notification of next of kin.

Officials fro the Cumberland County Sheriff’s Office and Federal Aviation Administration (FAA) are investigating the deadly aviation accident to determine what might have caused the plane to go down.