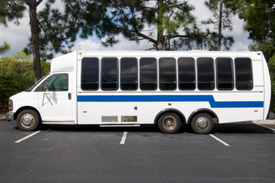 Cedar City, UT—A tour van crash ejected several people, leaving three dead and injured at least 15 others on Monday, August 9, 2010 near Cedar City. The fatal rollover crash occurred around 6:40 p.m. on Interstate 15, as reported by the Desert News and the Associated Press.

The Utah Highway Patrol reported, the van was transporting 15 people when the driver veered into the median of the interstate, causing the van to overturn.

Two people who were ejected during the wreck suffered fatal injuries. A third victim was also killed; that victim was found trapped inside the van. Two victims were reportedly adults, while the third was a child.

All 14 passengers and the driver were rushed to a local hospital in Cedar City for treatment. The Utah Highway Patrol spokesman, Cameron Roden said, “From there at least six have been airlifted to Salt Lake City with critical injuries.”

Officials are still working to identify the victims.

The tour van was reportedly transporting a Japanese tour group, which was traveling to Bryce Canyon National Park from Las Vegas.