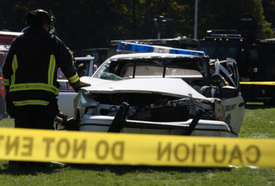 Miami, FL– An early Thursday morning, July 22, 2010 wreck nearly killed a Water and Sewer Department worker, when a police vehicle slammed into a bench where the worker was resting. The two-vehicle collision occurred around 2 a.m., on northbound 87th Avenue, reports The Miami Herald.

Miami-Dade police officials stated an Acura was driving alongside a police officer, when the driver of the Acura swerved to miss a Miami-Dade Water and Sewer Department truck that was parked in the inside lane. In doing so, the Acura slammed into the police cruiser, which caused the cop car to jump onto the curb and into a bus bench. A Water and Sewer Department worker just happened to be sitting on that bus bench at the time.

The county work truck reportedly had the proper working lights and signs on display at the time of the wreck. Apparently Otero simply didn’t realize that the truck was parked.

Both the Miami-Dade County worker, and the police officer were airlifted by rescue crews to Jackson Memorial Hospital for treatment. The officer reportedly sustained non-life threatening injuries, while the worker sustained a broken leg, and cuts and bruises to the face.

A full investigation into the accident is underway.