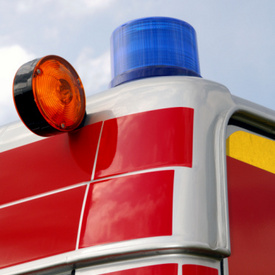 Rutherford County, TN—One person was killed and three others were injured when a van collided with an ambulance Thursday night, July 1, 2010. The motor vehicle accident occurred at the intersection of Highway 231 (Shelbyville Pike) and Highway 269 (Christiana Road), according to information provided by the Tennessean.

Reports indicated 63-year-old Ernest M. Spence Jr. had been traveling along Shelbyville Pike when he exited the highway, turning left onto Christiana Road. However, Spence’s GMC van consequently turned into the path of a Murfreesboro-bound ambulance.

The collision sent both the van and Coffee County ambulance careening off the road. Reports also stated one person, likely Spence (given that he was not properly restrained at the time), was ejected on impact.

Though it was not stated whether the ambulance had its lights and sirens activated, it was indeed transporting a patient at the time of the wreck.

Reports did not specify whether Colwell or Hill was the medic/patient. They were taken to Nashville-based Centennial Hospital for treatment.

Authorities from the Tennessee Highway Patrol (THP) were expected to investigate the fatal van vs. ambulance crash.