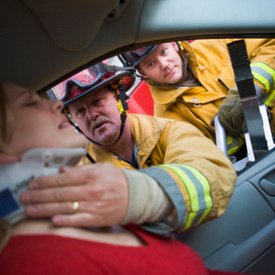 Sheboygan County, WI—A motor vehicle collision (MVC) involving a van and pickup truck resulted in one fatality and left four others injured. The unfortunate crash, which claimed the life of a 7-year-old boy, occurred Sunday afternoon, June 13, 2010, according to information provided by WISN.com.

A van was traveling northbound on Blueberry Lane in Sheboygan County when the deadly wreck occurred. As the van drove through the intersection of Blueberry and County Highway PP, it violently collided with a pickup truck.

Fire rescue crews were dispatched to the scene to aid those injured in the two-vehicle crash. The use of hydraulic rescue tools, otherwise known as the Jaws of Life, were deemed necessary in recovering crash victims from the damaged vehicles.

Unfortunately, an unidentified 7-year-old succumbed to his traumatic injuries at the scene. Both motorists, as well as a 5-month-old infant, were transported to Sheboygan Memorial Medical Center for treatment.

Their conditions and identities have not yet been released.

While no charges have been filed as of yet, the truck-van accident remains under investigation.

Sheboygan County Sheriff’s officials are asking all witnesses with information regarding the crash to contract the department at (920) 459-3112.