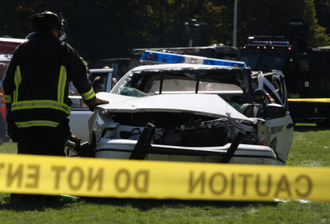 Clearwater Police Department (CPD) investigators reported a 36-year-old motorist, identified as Dawn Powell, driving east on Gulf to Bay Boulevard when she veered into the left turn lane at Lake Avenue. Upon doing so however, her car struck a westbound vehicle, driven by 22-year-old Pasquale DeCunto IV. A two-year-old child traveling in Powell’s vehicle was reportedly unrestrained and was subsequently ejected from the vehicle on impact of the collision.

Emergency medical services (EMS) crews seemingly responded to the scene to transport those injured in the wreck to hospitals for treatment. An 8-year-old boy and a 2-year-old infant were airlifted to Bayfront Medical Center via medical helicopter for the severe injuries they suffered in the motor vehicle accident. Two other children who were riding in Powell’s car apparently sustained minor injuries and were taken to area hospitals to be treated by doctors and nurses. DeCunto IV was taken to Morton Plant Hospital for non-life threatening injuries while Powell escaped injury in the crash.

The 8-year-old remains in critical condition though all others hurt in the accident were progressively recovering. Charges were allegedly pending the outcome of the CPD’s probe into the incident.