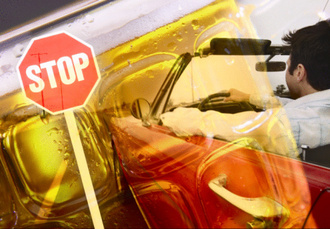 A drunk driver was charged with vehicular homicide for a crash that killed two New Mexico teenagers.

Santa Fe, NM—A five-vehicle crash caused by a drunk driver claimed the lives of two teenagers, which also left their parents and another person injured. The fatal multiple-vehicle collision occurred on Friday, March 5, 2010 around 9:00 p.m., on Cerillos Road in Santa Fe, as reported by KVIA.

According to police officials, the Peshlakai family of Naschitti, N.M., was on their way home from a basketball game, when another vehicle slammed into the back of their car. The collision set off a chain-reaction crash involving three other vehicles. Deshauna Peshlakai, 17, and Del Lynn Peshlakai, 19, who were both riding in the backseat of the initially stuck car, were killed in the collision. Their mother, Darlene Peshlakai and their father, David Peshlakai, were both injured and rushed to a nearby hospital by responding emergency medical services (EMS) teams for treatment. Darlene is currently in stable condition, while David is listed in critical condition. The driver of the vehicle that struck the Peshlakai family’s car was identified as James Ruiz, 34, of Albuquerque. A passenger in Ruiz’s vehicle was also injured, and is currently listed in stable condition. It was not reported if anyone in the three other struck cars sustained any injuries in the collision. Police officials believe alcohol was a factor, and Ruiz was arrested on two counts of vehicular homicide. Police officials are still investigating the deadly collision.