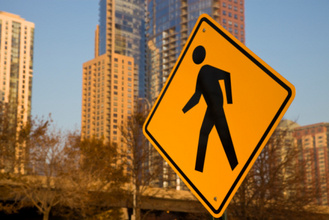 Legal news for Utah automobile accident attorneys. A car hit a pedestrian in the cross walk, throwing her 100-feet.

A collision between a car and pedestrian in a crosswalk critically injured a Brockbank Junior High School student.

Salt Lake City, UT—A Brockbank Junior High School student was hit by a car while she was crossing the street on Monday morning, February 8, 2010. The girl was critically injured around 7:00 a.m., at 8550 West 2700 South in Magna, as reported by KTSU.

The Unified Police Department reported that the 14-year-old girl was walking to school, using a crosswalk, when a car struck her. A police officer reported that the female driver was traveling east when she hit the girl and then threw her nearly 100-feet. The girl was airlifted by helicopter to the University of Utah Hospital for treatment of her severe injuries. She is reportedly listed in extremely critical condition at this time. Officials believe there may have been some sort of obstruction, like fog or ice, in the driver’s windshield that could have hindered her from seeing the young pedestrian in the crosswalk. The speed at which the vehicle was traveling at was not determined at this time. A full investigation into the wreck is currently underway by Unified Police Department officials. It was not reported if the driver was cited for the serious traffic accident, or taken into custody.